Liquor prices in Punjab to go up from April 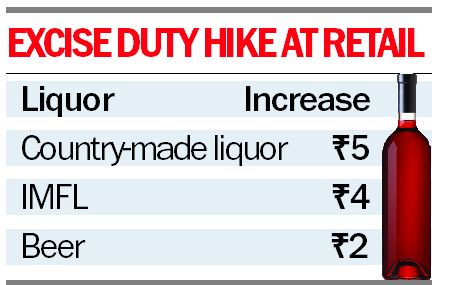 Prices of country-made liquor, Indian Made Foreign Liquor (IMFL) and beer in Punjab are set to increase from April 1, with the state government today announcing an increase in excise duty at retail and wholesale stages.

The Council of Ministers led by CM Capt Amarinder Singh approved the state Excise Policy for 2020-21 fiscal, with an increase in excise duty at retail — Rs 5 for country-made liquor (called Punjab Medium Liquor or PML), Rs 4 for IMFL and Rs 2 for beer.

This additional duty will increase the base price that the government sets for all categories of liquor and the liquor licensees are at liberty to increase the retail price to a maximum of 12.5 per cent of this base price. As a result, the country-made liquor prices are expected to increase by Rs 10, IMFL by Rs 5-10 and a nominal increase of Rs 5 per bottle of beer. At the wholesale stage too, the excise duty on the IMFL has been increased by 5 per cent, and for beer by Rs 62-Rs 68 per bulk litre. On the cards is the setting up of an online platform for home delivery of liquor in Mohali.

The order was issued on Wednesday