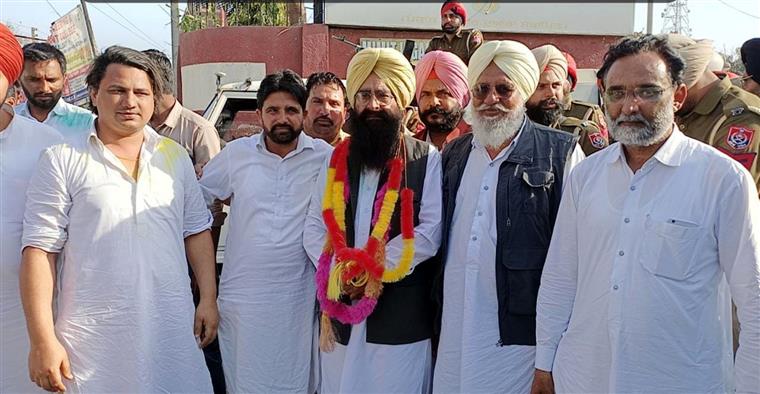 My priority will be to wipe out drug menace from Lambi. Further, a number of government institutes lack staff, which needs to be looked into immediately. — Gurmeet Singh Khudian, Lambi MLA

Gurmeet’s father was elected to Parliament in 1989 as an SAD (Amritsar) candidate. But within a few days, he disappeared mysteriously and his body was found from a canal six days later. Later, the family joined the Congress.

Till last year, Gurmeet was the lone Congress leader to take on the Badals in Lambi. However, after staying in the Congress for 30 years, Gurmeet joined the AAP last July on the assurance of a party ticket from Lambi.

Gurmeet, a matriculate and an agriculturist, was keen on contesting the elections in 2017 too, but ended up being a covering candidate of former CM Capt Amarinder Singh in Lambi. After the polls, he was removed as the district Congress chief.

Money is crucial during polls, but I have proved one can contest and win an election even if you don’t have it. My voters have borne my poll expenses. — Labh Singh Ugoke. Bhadaur MLA

Ugoke’s humble background helped him counter Channi’s claim of being a “poor CM”. His father works as a driver, while his mother is a contractual sweeper at a school. He had studied up to class XII and had been earning his livelihood repairing mobiles at his village. Ugoke joined the AAP in 2013 and became its block and circle president before being made the halqa incharge. His name was considered for a ticket during the 2017 polls, but the party gave it to Pirmal Singh Dhaula. Ugoke continued to plug away for the party in the area.

After Dhaula joined the Congress, many had predicted end of the AAP in the constituency. Ugoke not only revived the party’s prospects with his efforts, but ended up defeating the Congress stalwart. As per his affidavit to the Election Commission, Ugoke had assets worth Rs 1,29,634. With meagre assets, Ugoke managed his campaign with the help of area residents. — Parvesh Sharma

A minor objection to his appointment as chairman of the doctors’ cell of the Congress prompted eye surgeon Dr Charanjit Singh to consider contesting the Assembly election and settle a score with the sitting MLA, his namesake. Eight years on, the medico defeated MLA Charanjit Singh Channi, the outgoing CM.

Will set up govt college

My priority will be to set up at least one govt college and build a bridge over the Sutlej, besides providing playgrounds in all villages & towns. — Dr Charanjit Singh, Chamkaur Sahib MLA

After completing his education in Chandigarh, Dr Singh got enrolled in Government Medical College, Patiala, and completed his MS from Chandigarh in 1989. Having worked in the public sector, Dr Singh opened a private clinic at Morinda in 2000. Known for his social service in the area, Dr Singh had so far organised over 2,000 free eye check-up camps, conducting 45,000 surgeries free of cost.

His reputation in the area drew him closer to politicians and in 2002, he assisted Congress candidate Jagmohan Singh Kang in his victory from Morinda. In 2014, then PCC president Partap Singh Bajwa appointed him chairman of the doctors’ cell.

The surgeon said he had never thought of foraying into active politics. But Channi objected to it. Dr Singh joined the AAP in 2015 and contested for the first time in the 2017 polls. — Arun Sharma

Without holding big rallies, she used her humble demeanour to her advantage in reaching out to the voters.

A law graduate, Jeevan Jyot chose to set up a non-profit organisation in 1996-97. Her initiative ‘EcoShe’ earned her the title of ‘pad woman’ for raising awareness on the ill-effects of using plastic sanitary pads.

She tied up with a Swiss firm that provides reusable sanitary pads free of cost to underprivileged women. Lately, she had been distributing free reusable sanitary pads to women inmates in Punjab jails. For the past two decades, she had been working for the underprivileged sections in the fields of health, literacy, slum-rehabilitation, vocational education, women empowerment by making them self-reliant. It was her selfless service to uplift the lives of common man that caught the eye of Arvind Kejriwal, who offered her to join the party. — GS Paul

Ajit Pal Singh Kohli, 43, will make his debut in the Vidhan Sabha, defeating former CM Capt Amarinder Singh in his citadel. A former Mayor during the SAD-BJP tenure in 2011, Ajit Pal’s father Surjeet Singh Kohli had served as a Cabinet minister under the SAD-BJP regime.

Capt Amarinder and his aides reaped what they had sown. Corruption and his inaccessibility led to their failure as they forgot people who had elected them. — Ajit Pal Kohli, Patiala MLA

A month before the elections, Kohli had quit the SAD and joined the AAP, which fielded him from Patiala Urban — the stronghold of the royal family. Working closely with AAP volunteers to kept the local unit together worked for Kohli as there were no fissures within the party when his name was announced.

Kohli’s victory was so resounding that even Capt Amarinder’s and Congress candidate Vishnu Sharma’s votes put together were far less than his. Interestingly, Capt Amarinder had defeated Kohli’s father from the seat in 2002. Two decades on, his son defeated Capt Amarinder in a political revenge of sorts.

A businessman, the 43-year-old has assets worth Rs 32.4 crore, as per his affidavit to the EC. He completed his schooling from Yadavindra Public School and did his postgraduation in political administration from Punjabi University in 2006. — Aman Sood

My priority is to bring in a common minimum programme for the city. We will resolve the problem of waterlogging and ensure law and order in the area. — Jagroop Singh Gill, Bathinda Urban MLA

The 69-year-old was first elected as a councillor in 1979, and made it to the MC again in 1992, 1997, 2007, 2015 and 2021. He also held the posts of the chairman of the Improvement Trust, vice-president and president of the civic body and president of the District Bar Association. Gill served as the chairman of the District Planning Board, but just before the MC polls last year, he quit the post to contest the elections.

A lawyer, Gill won the MC polls last year for a record sixth time and was the frontrunner for the Bathinda Mayor’s post. But he was ignored by Manpreet, who chose first-time councillor Raman Goyal over him for the post. Irked, Gill left the Congress to join the AAP.

Gill was declared an AAP candidate for the polls and it is learnt several Congress leaders “helped” him behind the scenes. The seat has lived up to its reputation, as no sitting MLA has been able to keep it, with an exception in 1962. — Sukhmeet Bhasin

Bhattal and Dhindsa failed to bring about development in the area. I am confident that our government will bring about overall growth in our area. — Barinder Kumar Goyal, Lehra MLA

Goyal’s social work played an important role in winning over voters of his constituency. Goyal contested his first election on a BJP ticket in 1992, but lost to Bhattal. He subsequently tried hard to get the party ticket several times, but to no avail.

Determined to fight for the welfare of area residents, Goyal formed the Lehra Vikas Manch in 2021 and started raising issues such as lack of basic amenities, including potable water and others, in the area. With his hard work, he succeeded in getting elected to the nagar council.

When he finally got an AAP ticket on January 21, some leaders opposed it initially. But Goyal’s connect with local residents paid dividends and he was able to overcome the obstacle. Within a short span, he successfully built his campaign and ended up defeating the three big guns. — Parvesh Sharma

AAP’s Jagdeep Goldy Kamboj, 35, who had lost his security deposit during the Jalalabad bypoll in 2019, trounced SAD president Sukhbir Badal in his stronghold. Sukhbir represented Jalalabad thrice in 2009, 2012 and 2017, but lost to a relatively lightweight candidate.

Will root out drug menace

The bypoll was necessitated by Sukhbir vacating the seat after being elected to the Lok Sabha from Ferozepur in 2019. Congress’ Raminder Singh Awla had won the byelection, in which Kamboj, a former Congress man, ended up with just 5,836 votes. Kamboj, a then general secretary of the All-India Youth Congress, was expelled from the party for contesting the byelection against the party candidate. He later joined the AAP and was appointed as the state president of the BC wing of youth wing.

Starting his career as a youth Congress leader a decade ago, advocate Kamboj learnt the lesson of politics from his father Surinder Kamboj, who contested the Jalalabad seat twice and remained the chairman of the Punjab Agriculture Development Bank, Jalalabad. Kamboj also served as incharge of the J&K and Haryana Youth Congress for several years. — Praful Chander Nagpal