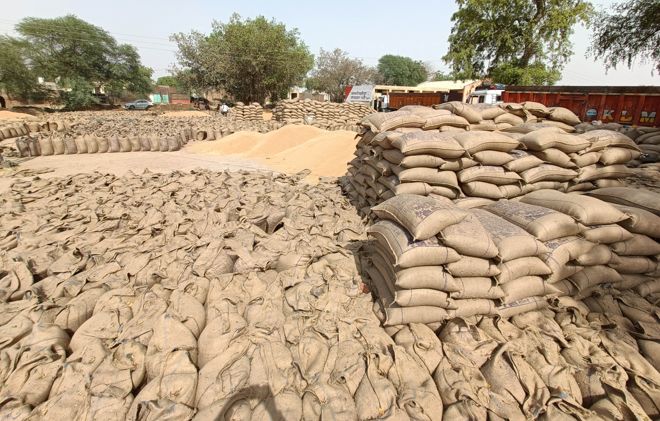 Early rise in temperature and its subsequent adverse impact on wheat production (low yield due to shrivelled grain) this year has not only created dent in farmers’ income, but it is set cause a substantial revenue loss to the Punjab Mandi Board and the state government as well.

Owing to decline in wheat production this year, the mandi board is set to lose out on sizable revenue on account of 6 per cent taxes; 3 per cent market fee; and 3 per cent rural development fund (RDF). Experts say the revenue is expected to be 15 to 20 per cent less in comparison to the last season.

Rs 47cr mandi board has made from market fee and collection of RDF in Mansa to date. The figure stood at Rs. 75.98 crore during the same period last year

Rs 25.44 cr board has collected as market fee alone so far in Bathinda. It generated Rs. 53.73 crore in the same period last year

Moreover, anticipating an increase in prices in the coming months, farmers have started holding their produce back so that they can sell it to private players at higher prices later.

A farmer normally holds back 5 to 10 quintal, but this year he is holding back 25 to 30 quintal and even higher volumes of wheat produce in a hope that prices will increase in future. —Rajnish Goel, District Mandi Officer, Mansa

District Mandi Officer (DMO), Mansa, Rajnish Goel said: “Wheat harvest started early this year. After gaining momentum recently, the wheat arrival has slowed down now. The revenue on account of market fee and RDF taxes is likely to decrease up to 25 per cent this season.”

DMO, Bathinda, Preet Kanwar Singh Brar said: “The revenue on account of market fee expected to come down by 20 to 25 per cent this year.” The state government had made more than Rs 1,500 crore from taxes last year.

Balwinder Sidhu, former Agricultural Commissioner, Punjab, said, “We are at the cusp of even a bigger challenge, it is that of unavailability of quality seeds for next season now. Farmers have started holding quality produce back, the government must make sincere efforts to procure that and germinate them to ensure quality seed as farmers would not get it from market.