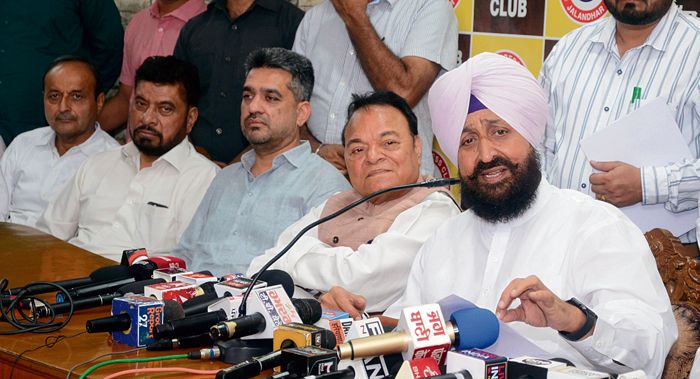 Congress leader Partap Singh Bajwa and other party leaders at a press conference in Jalandhar on Monday. Photo: Sarabjit Singh

Having been at the receiving end for the faux pas in Germany — first about a German carmaker setting up a plant in Punjab and later the controversy surrounding Chief Minister Bhagwant Mann’s delayed return to India from his official trip there — the AAP government today got into the firefighting mode.

Lufthansa Airlines made a statement on a micro-blogging site clarifying that its flight was not delayed because of any inebriated passenger on board, but because of a delayed inbound flight and change in aircraft.

The government, which was scrambling since yesterday to respond to Opposition charges of Mann being deplaned on Saturday night because of his alleged “inebriated“ condition, managed to get its act together. Since yesterday, the government response that the CM could not board the flight because of his sudden illness and not otherwise was lost in the din of charges by the Opposition.

Even as the government finally went on the offensive, Partap Singh Bajwa, Leader of the Opposition, shot off a letter to the Union Minister of Civil Aviation, seeking a probe into the matter, saying that “the incident was not about any individual, but involved the office represented by Mann”.