Mahatma Gandhi's 'adopted daughter' from Patiala who risked her life to stop riots : The Tribune India

Wherever communal riots broke, Bibi Salam was present with her most potent weapon — fasting 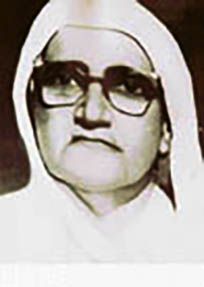 When Noakhali was in communal flames in 1946, she was right there as Mahatma Gandhi’s emissary embalming the wretched. When children and women were abducted in Dera Nawab, she shamed the Bahawalpur authorities with an indefinite fast. To douse the communal flames, Gandhi’s “adopted daughter”, Patiala’s Bibi Amtus Salam, criss-crossed the country from Bahawalpur to Kolkata and from Delhi to Dhaka.

Daughter of a Pathan aristocrat of Patiala, she died in Rajpura, but literally in oblivion.

“More than once she had risked her life by rushing to dangerous spots, during the communal rioting in Calcutta, Delhi and Dacca,” writes Pyarelal Nayyar, personal secretary of Mahatma Gandhi in ‘Mahatma Gandhi: The Last Phase’. Bibi Salam, a Muslim inmate of Gandhiji’s ashram, had become an adopted daughter to Gandhiji, he states.

“At Sirandi, Amtus Salam had been fasting against some local Muslims. It was the 25th day of her fast. She was a devout Muslim, who never missed her yearly Ramzan fast nor slept without the Quran by her side, some portion of which she read every day. Hindu-Muslim unity had been the passion of her life ever since her childhood and she held her life as of no account in its pursuit.”

In recent times, Prof Chaman Lal, editor of ‘The Bhagat Singh Reader’, who has tried to resurrect Bibi Salam through research and writings, says after Partition, when her brothers left for Pakistan, she chose to stay back in India and established Kasturba Seva Mandir in Rajpura, a town specially built to accommodate refugees from Pakistan. “She remained involved in bringing back a number of women left behind in Pakistan, together with Rameshwari Nehru and Lajjawati Hooja.”

After Gandhi’s death, Bibi Salam was known to have had direct access to Prime Minister Jawaharlal Nehru and Indira Gandhi, whom she addressed as “Beti Indu”.

She used her proximity with the Nehru-Gandhi family to solve problems of migrants. Activist and writer LC Jain in ‘City of Hope’ writes that in rehabilitation of Bahawalpur migrants in Rajpura, she found that the biggest problem was not the suffering humanity but the Rehabilitation Ministry itself. “When she failed with the Ministry, she sent a word to Nehru of the betrayal by the Ministry of his assurances to Rajpura refugees and her decision to go on an indefinite fast. Nehru asked Sudhir Ghosh, then Deputy Secretary in the Rehabilitation Ministry, to meet Amtus Salam and give him a first-hand report.”

“Amtus Salam lived a spartan life of self-sacrifice, despite her aristocratic family background and high position in the Congress. She was a collective heritage of Punjab but hardly anybody remembers her today. She passed away on September 29, 1985, unnoticed and unsung,” says Prof Chaman Lal.