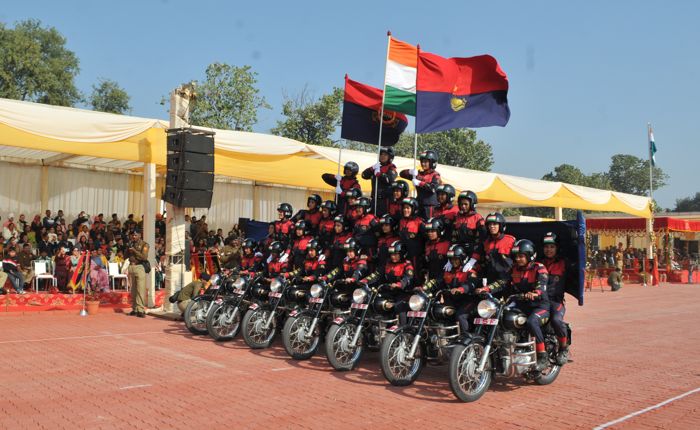 The BSF, which is deployed along 6,386 km of the International Border with Pakistan and Bangladesh, today organised a ceremonial parade, comprising the Mahila Prahari contingent at Guru Nanak Dev University in the holy city on the occasion of its 58th Raising Day.

For the second time, the Raising Day parade has been organised outside New Delhi. Last year, the event was held in Jaisalmer.

Minister of State for Home Affairs Nityanand Rai was the chief guest and took the salute of the parade, which comprised 12 contingents, including Mahila Prahari contingent, decorated officers and men, Camel contingent and Camel Band, mounted column, dog squad, communication contingent displaying technological advances by the force with special appearance by the BSF Bagpipers (men and women).

The MoS said, “Daredevil performance by women contingent proves that they are equally scripting stories of their indomitable courage.”

Rai added that various challenges, including infiltration, smuggling of arms, narcotics and drone penetrations from across the border were being effectively thwarted by the BSF.

“The Centre will leave no stone unturned to provide best equipment and infrastructure to ensure that operational challenges are fully met,” the MoS said, adding that the BSF’s presence along the IB has instilled a sense of security, in the mind of citizens.

Paying rich tribute to bravehearts, who laid down their lives in the line of duty, he recalled the role of the BSF in the 1971 war.

“Drones are posing a challenge to the forces. However, effective anti-drone mechanism and strict vigil has helped in foiling substantial number of such attempts,” he said, adding that the BSF has shot down 17 drones, 16 along the IB in Punjab and one in Jammu, this year.

He said over 500 kg of narcotics between November 2021 and October 2022, 64 weapons, 845 rounds of ammunition and fake currency had been seized by the paramilitary force.