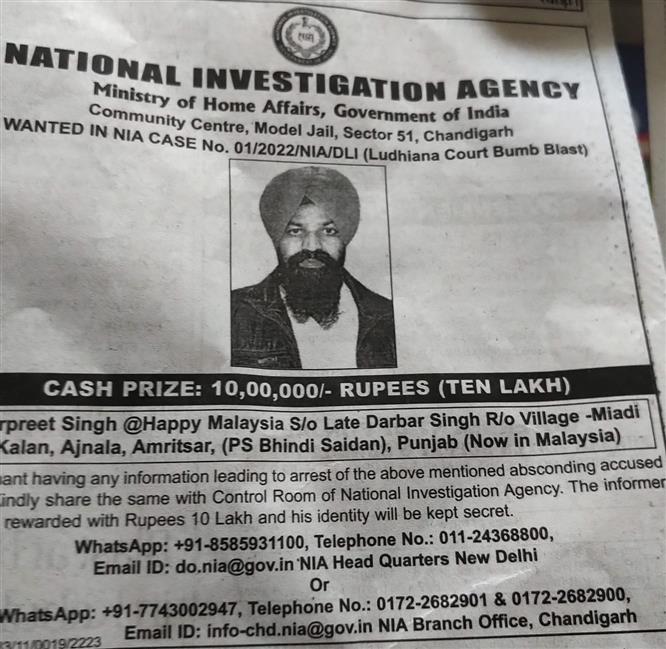 The poster released by the NIA.

A most wanted terrorist and the main conspirator behind the Ludhiana court bomb blast was arrested from Indira Gandhi International Airport here, an official of the National Investigation Agency (NIA) said on Friday.

Harpreet Singh alias “Happy Malaysia”, a resident of Amritsar in Punjab who was carrying a reward of Rs 10 lakh, was arrested by the sleuths shortly after he arrived at the airport from Kuala Lumpur, the NIA spokesperson said.

Earlier, the NIA had declared a reward of Rs 10 lakh on Harpreet Singh against whom a Non-Bailable Warrant (NBW) from the special court had been issued and a Look-Out-Circular LOC was opened, the NIA official said.

The case pertains to the massive bomb blast that took place in the Ludhiana Court Building. One person died and six persons were injured in the explosion.

The spokesperson said, the NIA investigation revealed that Harpreet Singh, an associate of Lakhbir Singh Rode, a Pakistan-based self-styled chief of International Sikh Youth Federation (ISYF), Punjab, was one of the conspirators of Ludhiana Court Building blast, along with Rode.

“Acting on the directions of Rode, he coordinated the delivery of the custom-made IED which had been sent from Pakistan, to his India based associates, that was used in the Ludhiana Court Complex blast. The arrested accused was also involved and wanted in various other cases, including smuggling of explosives, arms and narcotics,” the NIA official said.

The case was initially registered by Punjab police on December 23, 2021, which was later taken over by the NIA on January 13, 2022, the official said, adding that further investigations in the case were in progress.