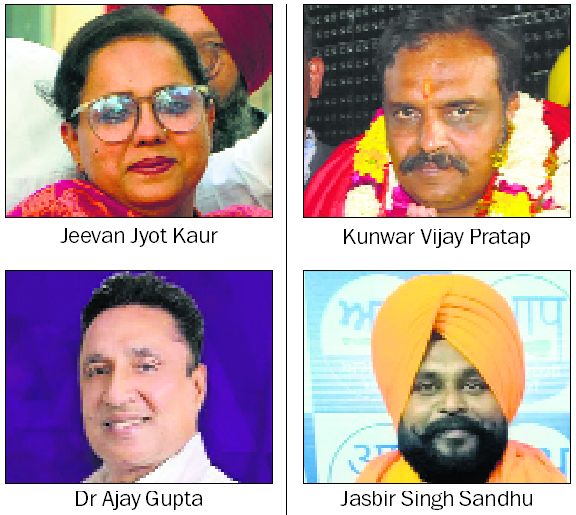 The non-inclusion of giant slayers from the holy city in the first Cabinet of the Aam Aadmi Party government has surprised many.

Although AAP candidates Dr Ajay Gupta and Jasbir Singh Sandhu, a BAMS doctor, defeated heavyweights, their names were not among the front-runners for the Cabinet. Even Jeevan Jyot Kaur, Kunwar Vijay Pratap Singh and Dr Inderbir Singh Nijjar, who were considered as strong claimants, could not make the cut.

The AAP had fielded three bureaucrats — Harbhajan Singh ETO, Kunwar Vijay Pratap Singh and Jaswinder Singh Ramdas — all of whom won the election. Among them, former IPS officer-turned-politician Kunwar was a strong contender, but his non-inclusion has come as a surprise.

Elected Pro-tem Speaker Dr Inderbir Singh Nijjar, who ended the three-time winning streak of his namesake Inderbir Singh Bolaria, was also a strong claimant for a Cabinet berth. Nijjar said he would abide by the party’s decision.

Sangrur, March 19
The euphoria among AAP supporters over the victory of Sunam MLA Aman Arora by 75,277 votes has been short-lived with the firebrand leader failing to find space in the Cabinet. “We were expecting Arora not only to get space in the Cabinet, but also to get a key portfolio,” said an AAP leader. — TNS