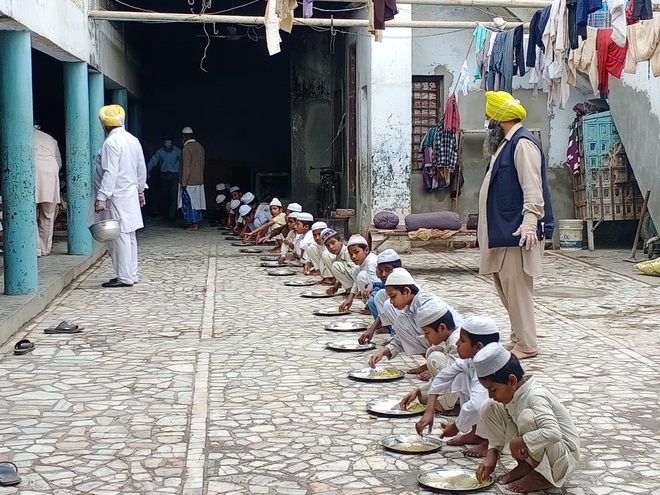 Apart from serving langar to around 1,000 needy and poor people every day, the authorities of Gurdwara Sahib Haa Da Naara in Malerkotla have been supplying food to Muslim students as well. They say they will ensure that not a single Muslim student of local madrasas goes hungry.

“After the imposition of curfew, we got to know that the authorities of local Tajweedul Quran Madrasa were facing problems in arranging food for their 40 students, belonging to Bihar and Uttar Pradesh. We immediately decided to provide food to them,” said Narinderpal Singh, head granthi of the gurdwara.

The sewadars with the help of local women have been preparing langar for over 1,000 residents every day. On the first day, when the gurdwara committee members went to the madrasa with food, they faced problems as the students did not have the required utensils.

“The next day we also took utensils from the gurdwara. We request the area residents, NGOs and social workers to come forward as we all need to get united and help the poor to save our country,” said Bahadur Singh, president of the gurdwara committee.

Janab Salim, maulvi of the madrasa, said all students were from other states and they had tried to send them back to their parents. “But after the imposition of curfew, the trains were cancelled. Since we did not expect sudden curfew, we couldn’t make required arrangements. But we are thankful to the gurdwara committee for taking care of it. They always help whenever anyone is in trouble,” he said.