Bhagwant Mann gets resounding welcome at Secretariat : The Tribune India 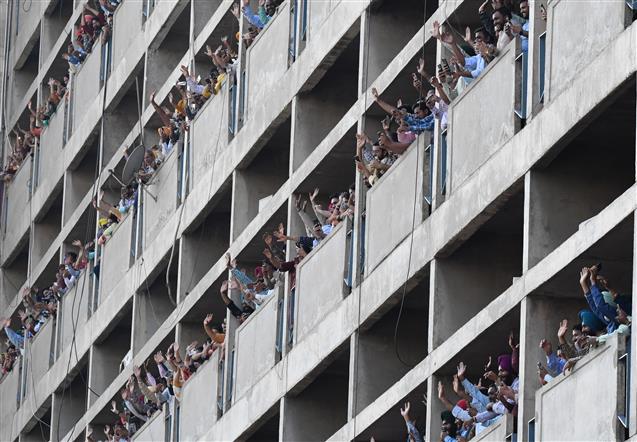 If the sea of humanity greeted Punjab’s new Chief Minister Bhagwant Mann at Khatkar Kalan, the state government employees, extended him a warm welcome in Chandigarh.

Hundreds of employees gathered on the balconies of Punjab Civil Secretariat, waiting to welcome him. Never ever has any CM received such a resounding welcome from employees as was seen today. They greeted Mann with claps and cries of joy, as soon as he reached the Secretariat.

“People have voted for him, with nothing but hope. Like the rest of the electorate, the employees, too, want a change in the political establishment. Their joy is thus understandable,” says Monu Ram, who is working in PWD (B&R). Though Mann was to arrive here to take charge as the CM at 3.45 pm, employees started standing in the balconies at least an hour earlier.

In the just-concluded Assembly polls, government employees overwhelmingly supported AAP. “There was a lot of political interference in the functioning that resulted in poor governance. We are hopeful that this will change, and especially the police will be allowed to work independently,” said an official posted in the Chief Minister’s Office.

Another employee from the police department, who asked not to be named, said: “Expensive education and healthcare concerned employees too. AAP promised to build good public health and education infrastructure. It has already shown us the Delhi model. Most people felt that they were investing in their own future as they voted for change. Since there is hope for better days, there is a lot of excitement among employees,” he said.

Mann, too, responded by waving at the employees and acknowledging their love with a bow. Mann was given a guard of honour by the 82nd Battalion of the Punjab Police upon his arrival. He was received by Chief Secretary Anirudh Tiwari, DGP VK Bhawra and ACS to CM, A Venu Prasad. Almost all senior officers and senior cops were present as Mann assumed charge. In a brief message to officers, he made it clear that his government would work for the welfare of the people, who had given him a historic mandate. He assured the officers that together they would work for improving the lives of people and taking Punjab on the path of growth.