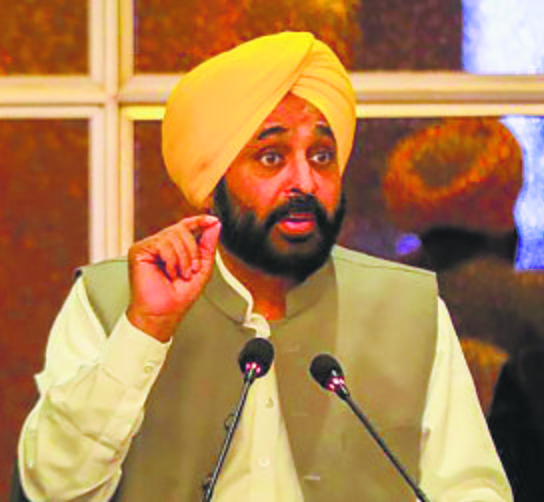 Chief Minister Bhagwant Mann has retained 27 departments, including the all-important Home portfolio, leaving the remaining 29 for his 10 Cabinet ministers.

On the advice and recommendation of Chief Minister Bhagwant Mann, Governor Banwarilal Purohit on Monday allotted portfolios to the newly inducted ministers.

As is the practice in the past, CM Mann will hold the portfolios of Home Affairs and Justice and Vigilance. He will also retain Administrative Reforms, Civil Aviation, General Administration, Housing and Urban Development, Local Government, Industries and Commerce, Agriculture and Farmers’ Welfare, Horticulture, Conservation of Land and Water, Food Processing, Investment Promotion, Science Technology and Environment, Parliamentary Affairs, Elections, Removal of Grievances, Freedom Fighters, Technical Education and Industrial Training, Employment Generation and Training, Labour, Printing and Stationery, Defence Services Welfare, Governance Reforms, New and Renewable Energy Sources and Information and Public Relations. The portfolio, if any, not allotted to any of the ministers shall vest with the Chief Minister.

Dirba MLA Harpal Singh Cheema has been assigned the portfolios of Finance, Planning, Programme Implementation, Excise and Taxation and Cooperation.

Dr Baljit Kaur has been given Social Justice, Empowerment and Minorities and Social Security, Women and Child Development. Harbhajan Singh ETO has been given the charge of Public Works and Power. With health being a key focus area of the new government, Dr Vijay Singla, a dentist, has been allocated the portfolios of Health and Family Welfare and Medical Education and Research. Lal Chand has been allotted Food, Civil Supplies and Consumer Affairs, Forests and Wildlife.

Education, another thrust area for the AAP government, has gone to Barnala MLA Gurmeet Singh Meet Hayer. He been allotted the departments of School Education, Sports and Youth Services and Higher Education.

Kuldeep Singh Dhaliwal, a farmer, has been given charge of Rural Development and Panchayats, Animal Husbandry, Fisheries and Dairy Development. Dhaliwal, who had been an NRI, has also been given the NRI Affairs. Laljit Singh Bhullar has been given the charge of Transport and Hospitality. Brahm Shankar Jimpa has been assigned Revenue, Rehabilitation and Disaster Management, Water Resources and Water Supply and Sanitation departments. Harjot Singh Bains has been given the portfolios of Legal and Legislative Affairs, Mines and Geology, Tourism and Cultural Affairs and Jails.