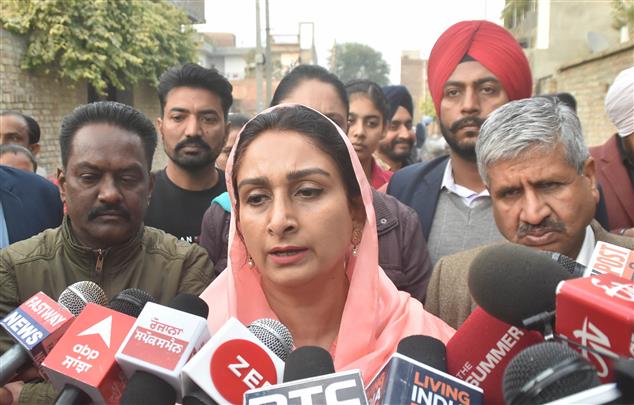 Akali Member of Parliament Harsimrat Kaur Badal came out in support of her brother Bikram Singh Majithia on Wednesday as she claimed that he was being implicated "without a shred of evidence".

Badal, who was in Amritsar for the day, paid a visit to the Golden Temple. She said her family sought the strictest punishment for anyone connected with drug smuggling cases in the state.

“ Today, I prayed at Sachkhand Sri Harmandar Sahib that if my brother Bikram (Majithia) has indulged in trading or spreading even a pinch of drugs in any manner, Guru Sahib may inflict the most horrible punishment on each and every member of our family. Conversely, those who resort to brazen lies over the drug issue as well as on the issue of sacrilege of Shri Guru Granth Sahib may also be made to face the fate that any ‘Guru ghar da dokhi’ (offender against Guru’s holy abode) deserves,” she said.

She also accused rivals Congress and the Aam Aadmi Party of engaging in the “worst and the filthiestlies of the lowest kind on both the sacrilege and the drug issues, just for political gains”.

“In these last seven years, they played sinful politics over the most sensitive and profoundly painful issue of sacrilege and accused us without any evidence,” she said. “But I have full faith in the divine justice of Guru Sahib (Almighty). I am sure that truth will come out and those really guilty of these sins and crimes as well as those who allowed these culprits to escape just to promote their conspiratorial narrative against SAD will face punishment one day”.

Her remarks come on a day when Majithia, who faces drug charges and who recently got a temporary respite from arrest from the Punjab and Haryana high court, was announced to be SAD’s candidate from Amritsar East against Punjab Congress chief Navjot Singh Sidhu.

The Punjab and Haryana High Court recently agreed to extend Majithia’s protection against arrest for three days, although making it clear that the respite was only temporary to enable him to appeal its rejection of his anticipatory bail application in the Supreme Court.