Working at Bangiwal village, she is one of the only two women among the 13,500 chowkidars appointed by govt 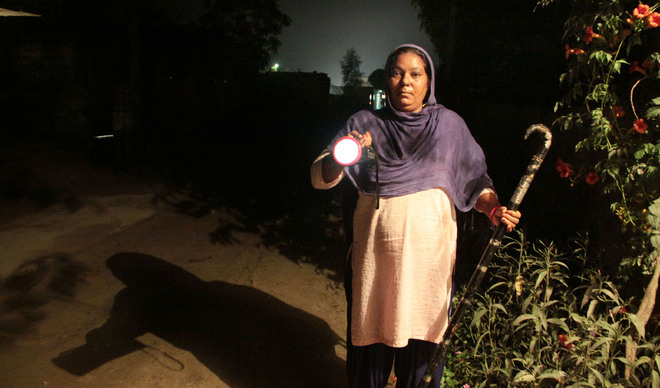 As the night deepens, she picks up the khunda (a long, wooden stick) and a torch and sets out to guard the alleys of her village every day. Kuldip Kaur (55) has been working as the village chowkidar at Bangiwal, a remote setting here since 2008. Shredding to pieces gender stereotypes, she is one of only two women among the 13,500 chowkidars appointed by the government to guard 13,000 villages of Punjab. The other is Razia Begum, who guards Bir, 15 km away from Bangiwal, who came into profession a year or two after her.

Dressed up in a simple salwar-kameez, head covered with a dupatta, the moment she steps out, her first priority is to take a quick check of the several lanes in the village before coming around to the main street by 9.30 pm. “After that, I go and sit for at least 20 minutes at a chabutra (platform) built around an old banyan tree, where the men play cards during the day. I sit there and call out villagers’ names and shout ‘Jagde raho’ (keep awake),” Kuldip says, adding, “Then I move to the other corner of the village.”

With a population of around 1,500 and around 500-600 houses at stake spread over three or four sq km, long breaks are off the table as she has to take a round of entire lanes. “Earlier, I used to work for seven to eight hours ie till 3:30-4:00am, but since the last two or three years, I have been working for four to five hours only and return home between 12:30-1am,” she shares.

The reason for this is that she has been diagnosed with a cataract recently, which has been making it difficult for her night duty. Though she comes home early, one of her two sons take the mantle from her. “At times people even make fun of me when I say Jagde raho as I pass by their homes, but all these things don’t affect me anymore as I have become used to it,” she says.

Talking about her journey as a single mother to eight children and how it feels to be a woman chowkidar, Kuldip says she was offered the job as relief after her husband Avtar Singh, who was the village night guard before her, suffered a heart attack and died in 2008.

She says there was no other option back then and had to take up the job as three of her daughters and two sons were studying. She was in a dire need of money to stitch her ends.

“This job over the time has given me an identity, and is my only source of income beside widow pension which is just Rs700 per month”, she says, adding at times she is also responsible to summon people for this official gathering and on some days, she is even asked to guard the gurudwara as well.

However, the earnings from the job are not enough she feels. “I earlier used to get Rs800 and now I earn Rs1,250, which is very less to manage a family of six.” Besides, she hasn’t been receiving pay on time and it is after three or four months, the government deposits her pay in the account.

When asked about the fears of guarding the village all alone at night, Kuldip laughs and says she has been into this job for 12 years and even the dogs recognise her voice and wag their tails as she passes by. “I wasn’t scared of this job when I first accepted it. But yes, my kids were a little scared and even used to visit me late at night to check if I am okay,” she says, adding that over the years the fear of her kids regarding her safety has vanished. “They now call me a superwoman!” she quips.

Even as she is suffering from a cataract and has no money for surgery, she is all dedicated towards her job and says can’t compromise with the duty as it is with this chowkidari income that the expenses of her family are taken care of. Meanwhile, amid the pandemic, she has had two jobs. Along with guarding, she also sensitised people to the safety guidelines. “During Covid, keeping vigilance in and around the village became quite stringent and I was asked to ensure that no one steps out during odd hours. So, instead of shouting my pet phrase ‘jagde raho’, I would call out ‘ghar vich hi raho’, she says.