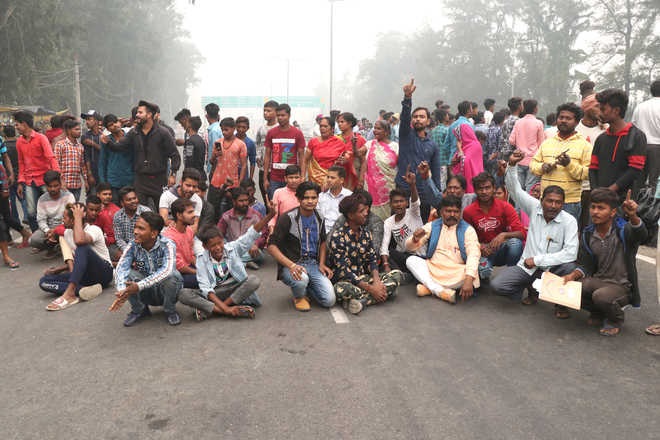 Hundreds of migrant labourers blocked National Highway 44 at Dhandari here on Sunday, alleging that the concerned authorities failed to provide them with ration. They raised slogans against the state government and police.

The protestors also blamed the administration for not making transport arrangement to shift them to their native places located in other states. Some infuriated protestors allegedly pelted stones on the cops and the vehicles moving on the road during the protest.

The highway was blocked for nearly half-an-hour by the protestors. Heavy police was deployed at the site to bring the situation under control.

Meanwhile, a member of a labourers’ union said, “We came to know about the protest from social media. However, the situation of labourers is not well in the city. Many of the labourers are not getting ration timely. The helpline number for ration always remains busy. Even the migrant workers are not being paid by the factories. Thus, many of the migrants wanted to move to their respective native states at the earliest.”

Ludhiana Police Commissioner Rakesh Agrawal said that a flag march in the area was conducted after the Dhandari incident. He said, “The SDM and ADCP are conducting meetings with the migrant leaders. We are increasing ration distribution and cooked food supply in the area. We will ensure that nobody goes hungry.”

“Videography and drone coverage is being done in the area. Anybody who tries to disrupt the peace of the city will be dealt with a heavy hand. Counselling about trains will start soon after the approval from the central government,” he said.

“We are registering FIRs and trying to identify the accused from video footage. We will also verify who were the persons behind the incident and instigated the migrant labourers because they seem to be innocent,” he added.