Total 1.26 lakh cattle have been affected by LSD while more than 10,000 animals have died 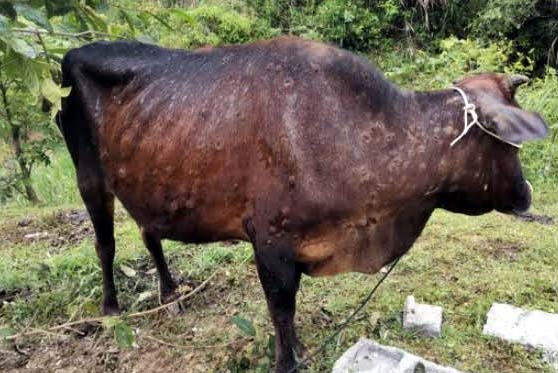 Dairy farmers in Punjab have witnessed 15-20 per cent fall in milk output in the wake of outbreak of lumpy skin disease in the state, Progressive Dairy Farmers' Association (PDFA) said on Sunday.

With the contagious disease affecting cattle, especially cows and also causing mortality among animals, the small and medium dairy farmers, whose livelihood entirely depends on livestock, were the worst affected, it said.

According to data provided by the state's animal husbandry department, total 1.26 lakh cattle have been affected by lumpy skin disease (LSD) while more than 10,000 animals have died so far because of the infectious disease.

However, the PDFA claims that more than one lakh cattle have died in the state due to LSD since July.  Notably, LSD has mainly affected cows with several districts including Fazilka, Muktsar, Faridkot, Bathinda and Tarn Taran being the worst-affected areas in the state.

The disease spreads rapidly among animals through flies, mosquitoes and ticks. It causes soft blister-like nodules all over the body, fever, runny nose, watery eyes, salivation, reduced milk yield and difficulty in eating.

“Because of the outbreak of LSD, milk production in Punjab has dropped by around 15-20 per cent,” said PDFA president Daljit Singh Sadarpura.

“Because of mortality among cattle and animals being affected by LSD, average milk production of cows is expected to remain low for at least one year,” he asserted.

Punjab's total milk production of cows and buffaloes is around 3 crore litres per day, out of which 1.25 crore litres is sold in the market, said Sadarpura.

Punjab has around 22 lakh cows. Sadarpura said dairy farmers have been the worst affected because of the contagious disease.

Dairy farmers, a few days back, had met Punjab Chief Minister Bhagwant Mann and sought compensation of Rs 50,000 per animal which died because of LSD.

“We want the state government to give at least compensation of Rs 50,000 per cattle,” Sadarpura told PTI.

The animal husbandry department has administered around 5.94 lakh doses of vaccine to animals in order to check the spread of the disease.

It has also targeted to vaccinate 10 lakh more cattle next week.

Officials of the animal husbandry department on Saturday said the effect of LSD has started decreasing in Punjab.

The state government had already formed a group of ministers to monitor and control the disease.

On August 16, Union Minister for Fisheries, Animal Husbandry and Dairying Parshottam Rupala had reviewed the vaccination of cattle in Punjab and Haryana in the wake of LSD affecting a large number of animals and had assured of help from the Centre.