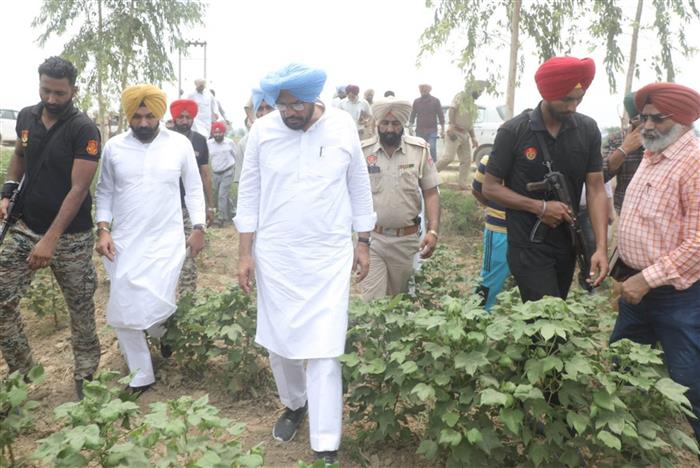 The Minister for Rural Development, Panchayats, Agriculture and Farmers Welfare and NRI Affairs, Kuldeep Singh Dhaliwal, on Tuesday inspected the local cotton fields to assess the damage to the crop by the whitefly and pink bollworm attack.

Dhailwal said 230 teams formed by the department on Tuesday visited 757 places – with 370 areas affected by whitefly and 14 by pink bollworm — and surveyed the cotton crop. He said strict action would be taken against any person found selling counterfeit pesticides or charging higher than the prescribed rates.

Dhaliwal further said Chief Minister Bhagwant Mann-led AAP government was making special efforts to promote modern methods in agriculture for farmers’ welfare and had banned the use of artificial seeds, fertilisers and medicines. “We will eradicate every mafia in the agriculture sector. The matter of Gujarati seeds being sold by deceiving the farmers of the cotton belt will also be probed,” he added.

Earlier in the District Administrative Complex, the Cabinet Minister held a special meeting with the officials of seven cotton districts in Malwa — Bathinda, Mansa, Muktsar, Fazilka, Barnala, Faridkot and Sangrur.

Meanwhile, during his visit to the affected areas, Dhaliwal assured the farmers that their crops would not be harmed in any way. He said in order to make crop diversification a success, emphasis would be laid on the marketing of maize and other allied crops like corn.

Talking to the media, Dhaliwal said in order to save the farmers of Punjab from a serious crisis, the state government had made every effort to make agriculture a profitable business and to carry out farming in modern ways.

Replying to a query, he said the teams appointed by the department would again visit the cotton fields on July 28 to take stock of the situation.

Responding to another question, Dhaliwal said a three-member flying squad had been formed by the Agriculture Department to control the pink bollworm and whitefly attack. “A helpline number will also be issued soon for the public,” he added.