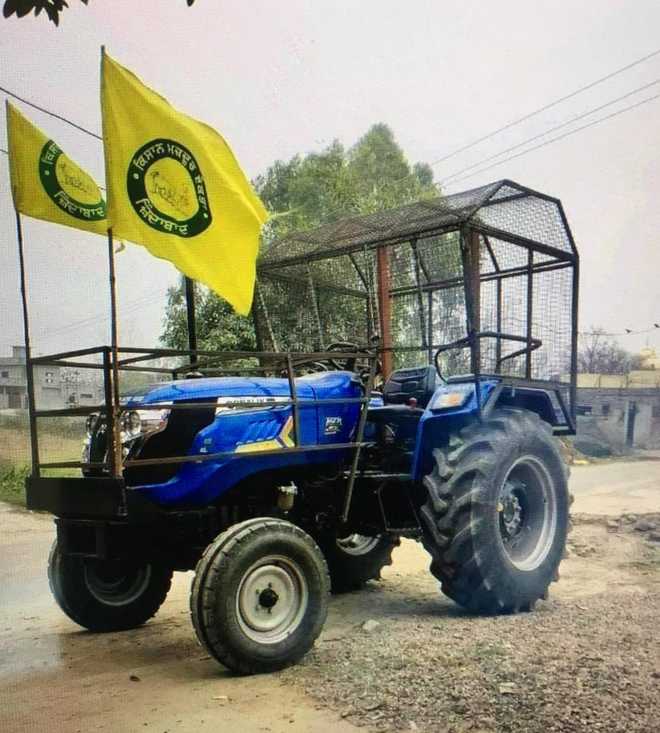 A tractor modified with wire mesh to protect the driver from tear gas shells and police canes. Tribune photo

Rural Punjab has gone into an overdrive ahead of the proposed farmers’ tractor march in Delhi on Republic Day with tractors being fitted with hydraulic tools to remove barricades, fire-resistant hardshell trailers being readied to fight tear gas shells and horsepower of the machines being doubled to ferry maximum protesters.

While the unions assert the march will be peaceful, Ranbir Singh Randhawa, president, Punjab Students’ Union, which is part of the farmers’ movement, says: “We have learnt from our experience during the November 26 march to Delhi.”

With a limited support from organisations, volunteers are spending money from their own pockets to make these modifications.

“An average tractor’s capacity is 55 hp, but learning from our earlier experience, wherein farmers were unable to remove big containers blocking the highway, we are doubling the horsepower of these machines to 100. A new engine costs lakhs of rupees, but people are spending from their own pockets. At Bhogpur near Jalandhar, some mechanics are doing the job with perfection,” he says.

Manjit Dhaner, vice-president of the BKU (Dakaunda), says with the help of local mechanics and fabricators, some people are modifying trailers too. “Earlier, tarpaulin sheets over trailers had caught fire after tear gas shells landed on them. Now, these have been replaced with wire mesh,” he says. With a recruitment drive for volunteers under way, modifications are being made to ferry them safely on tractors. “In Hoshiarpur, a group of farmers has hired long trailers to carry 10 tractors to the site,” says Rajinder Singh Deep Singhwala, vice-president, Kirti Kisan Union.

Those without tractors have also been queuing up as volunteers. They have been asked to carry portable water buckets to defuse tear gas shells, if the situation arises.

Around 10,000 volunteers have come forward within a week of unions’ recruitment call. Punjab Students Union, Naujawan Bharat Sabha and Kirti Kisan Union are holding the drive in all districts of the state.