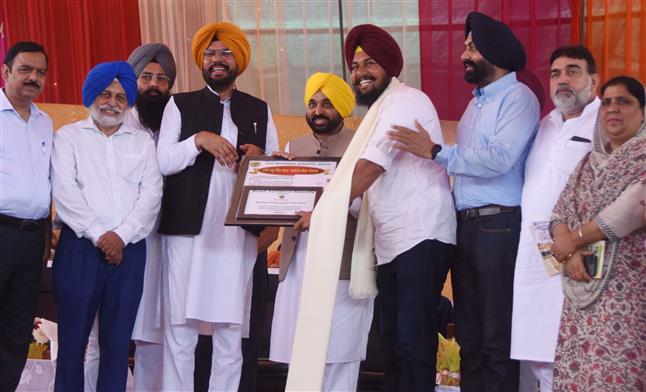 Where governments fail, the common man succeeds. This is what the youth of a village in Moga have proved. After the successive dispensations failed to find a solution to their grave pollution problem, they themselves pitched in to clean the polluted water and rejuvenate dirty water ponds in their village.

The Ransinh Kalan village residents contributed a whopping Rs 4 crore to set up a sewage treatment plant (STP) through which they are cleaning 4-lakh litre polluted water on a daily basis.

To recognise the pro-environment initiative of the villagers, Punjab Agricultural University (PAU) has felicitated them with a new “Bhai Babu Singh Brar Sarvotam Chappar Award”. The award was presented by Chief Minister Bhagwant Mann after inaugurating a two-day kisan mela here on Friday.

The felicitated village sarpanch, Preet Inderpal Singh, who received the award, said peeved at the pollution caused by the dirty water, the village youth had launched a cleanliness drive and set up an STP to treat the polluted water for its reuse.

The sarpanch said the STP daily converted about 4-lakh litre of polluted water into clean water, which was used for irrigation purposes. “Three wells have also been constructed to clean the contaminated water. The water goes to three ponds where fish perform the activity of cleaning the water. Thereafter, water is cleaned through the sewage plant for irrigation purposes,” he said.

He said the villagers also cleaned the dirty water ponds in the village spread across 5 acres and connected them to the STP. “The ponds have been given a look of a lake and are giving an annual income of Rs 1 lakh from fish farming to the village,” the sarpanch said, adding that the villagers were now planning to go for rainwater harvesting in the village.