Monsoon below par in northwest, but water level in dams above normal : The Tribune India

Monsoon below par in northwest, but water level in dams above normal 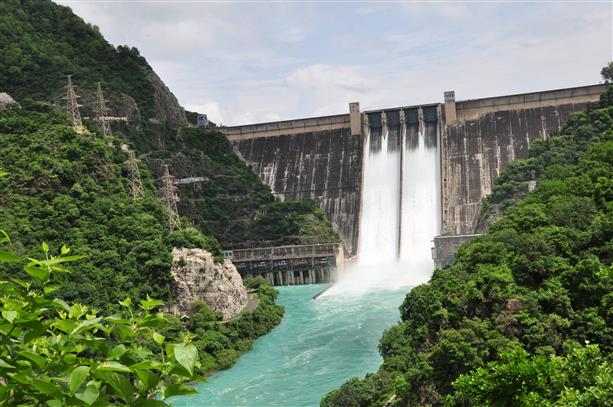 While rainfall has been below the long period average in the northwest India during the monsoon so far this year, the level of water in crucial reservoirs in the region is above normal for this time of the year when the monsoon is in its last phase.

Rainfall has been below par by 19 per cent in Punjab, 15 per cent in Haryana and nine per cent in Himachal Pradesh. On the other hand, the current storage in dams is 16 per cent above normal in Punjab and six per

cent above normal in Himachal Pradesh.

According to data compiled by the Central Water Commission (CWC) on September 8, the present storage at the Bhakra Dam on the Sutlej in Himachal Pradesh is 82 per cent of its total capacity as compared to 57 per cent at this time last year. The average storage over the past 10 years has been 80 per cent.

The Pong Dam on the Beas in Himachal Pradesh is filled up to 88 per cent of its capacity as compared to 47 per cent last year and an average of 79 per cent over the past 10 years.

The current storage at the Thein Dam on the Ravi is 80 per cent of its total capacity as compared to just 36 per cent at this time last year. The average storage for this period over the past 10 years is 69 per cent.

According to officials of the Bhakra Beas management Board, it is unlikely that dams would be filled up to their maximum capacity this year, unless there was a freak weather event resulting in heavy rains upstream.

From June 1 to September 9, Punjab received 321.2 mm rain compared to the normal of 396.6 mm for this period, data compiled by the Indian Meteorological Department (IMD) shows.

The weather department has predicted subdued rainfall activity to continue over the plains of the northwest during the next 5 five days though there is a forecast of heavy to very heavy rain in several other parts of the country.