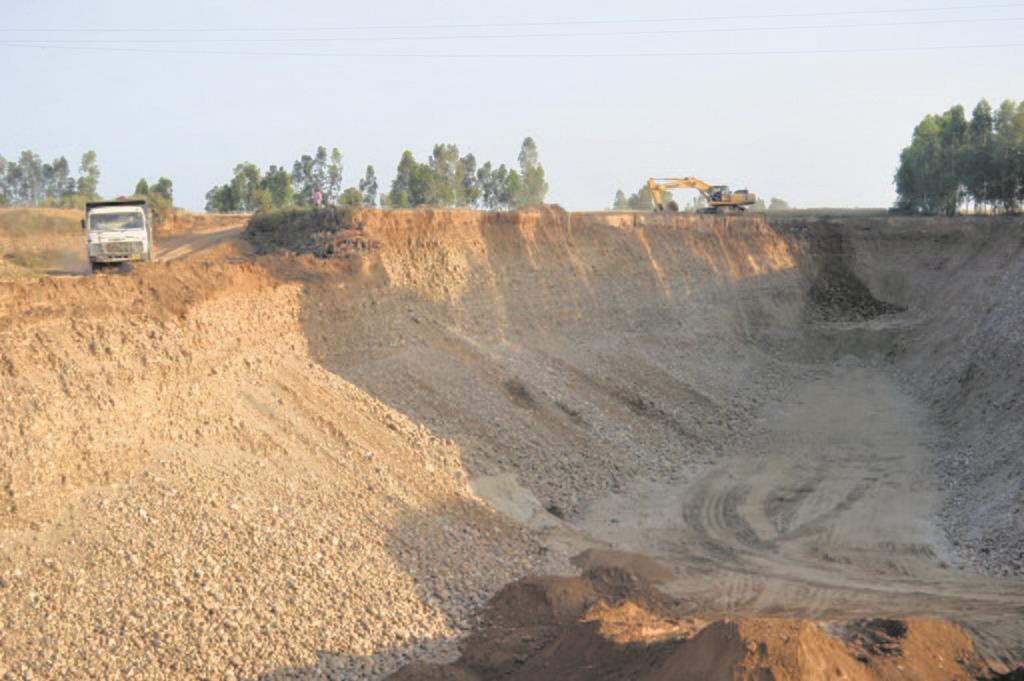 A deep gorge caused by mining in villages around Hajipur in Mukerian subdivision. Tribune photo

With no authorised quarry in the area, mining in the garb of levelling farmlands around Hajipur and Talwara poses threat to the adjoining fields. Farmers are losing their fertile land to soil erosion. Still, neither the Panchayat members accept it nor do the Mining Department officials. Some whistleblowers and a village Sarpanch are vocal against it, yet unheard. Jiwanwal, Dhamia Kalan, Kullian, Badhan and Deval villages are the worst affected.

The department has issued recovery notices and if any mining activity comes to the fore, the SDO can flag the issue. — Ajay Pandey, JE of mining department

In these villages, several people have given their farmland to crusher owners in the garb of levelling it. At many places, the gorges caused by mining are posing threat to the adjoining fields. Surinder Kaur, Sarpanch of Kullian village, said: “Seven acres of my land are adjoining one such illegal quarry, dug more than 60-feet deep. We have lost four kanals due to soil erosion. Four months ago, we filed a complaint. The BDO came and checked the ongoing mining and it stopped for a few days. But it has resumed now and no one listens to us.”

However, Sarpanch of Jeewanwal village, Kashmir Kaur, denies it. “Some mining was done a few years ago but not now. Some villagers have got their farmlands levelled and some stone/ soil has been lifted from there, nothing else,” Kashmir Kaur said.

Khanan Roko Zameen Bachao Sangharsh Committee’s representative Dharminder Singh said: “Illegal mining is turning farmlands into rubble. At some places, the upper layer of soil has vanished and the white sand has come up. There are atleast nine such quarries in Hajipur-Talwara area of Mukerian subdivision, more than 50-70 feet deep, threatening to erode the adjoining farmlands.”

Ajay Pandey, JE of the Mining Department, said only Taggar Kalan quarry was auctioned but it was not functional. The department has issued recovery notices and if any mining activity comes to the fore, the SDO can infrom the department about it.

SDO Rajiv Kumar said: “The places which have been referred to as illegal mining are old quarries which have been auctioned 4-5 times. No unauthorised mining is going on.” Asked about the notices issued in the recent past, he said: “I don’t have the numbers but several notices were issued, some of them last week. I am in field and no mining is going on anywhere in the area today.”