‘The groom is there, yet the people of Punjab to decide whether to marry him or not’: Punjab Congress chief 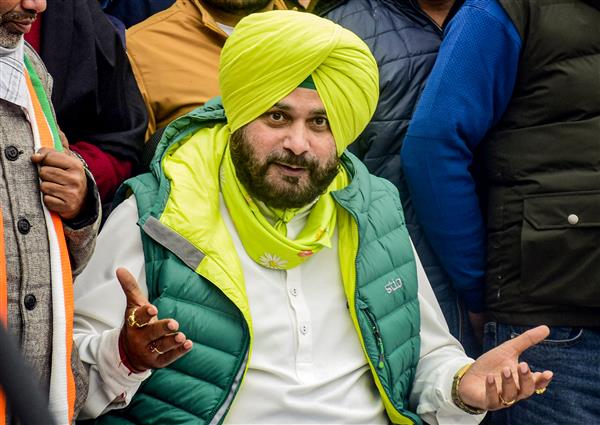 Reacting to A declaring Bhagwant Mann as its CM face in the ensuing Punjab polls, PCC president Navjot Singh Sidhu said that the ‘groom’ could be there, yet it would be prerogative of the people of Punjab to accept him or not.

Sidhu who visited East constituency today, showed a glimpse of the ‘Punjab model’, focussing on illegal sand mining that has been rampant in the state.

While the Congress was still lagging behind in projecting its CM candidate for 2022, AAP has taken the lead in declaring Mann as its official CM candidate.

“If ‘groom’ has been decided, I congratulate them. But, the people of Punjab will take a call on whether they would also like to marry this groom or not. ‘abhi Dilli badi door hai’”, he said.

Sidhu also made it clear that the next elections would be fought on a specific pro-Punjab ‘agenda’ and that he stood by the welfare of the state.

“Our high command (Congress) is intelligent. Whatever it decide, would be in favour of Punjab. I have a firm belief on the people of Punjab that they would vote for Punjab model, on an agenda. Sidhu stands for a roadmap. If agenda is there, Sidhu is there. If the motive is just to grab the power, then Sidhu would not be there,” he said.

Giving a glimpse of Punjab model in respect of illegal sand mining, he categorically advocated for sole control of the government over sand mining.

He viewed that the Punjab government-oriented mining corporation be formed by disbanding the existing thekedari system.

Sidhu added that it would be the transport mafia that misappropriated sand. “That has to be curbed by making state owned stock yards, online booking at fixed rate, delivery by specific colour trucks and charging them GST. The rates of sand have to be fixed to be offered to the end consumer at cheaper rate. This will also generate around Rs 2000-Rs 3000 crore revenue to the state annually and at least 60,000 jobs,” he said.

On Enforcement Directorate conducting raids on those allegedly involved in illegal sand mining, including one of relatives of CM Charanjit Singh Channi, he whiled away by saying that no one could be held guilty until unless it was proved and the wrongdoers would be liable to answer.