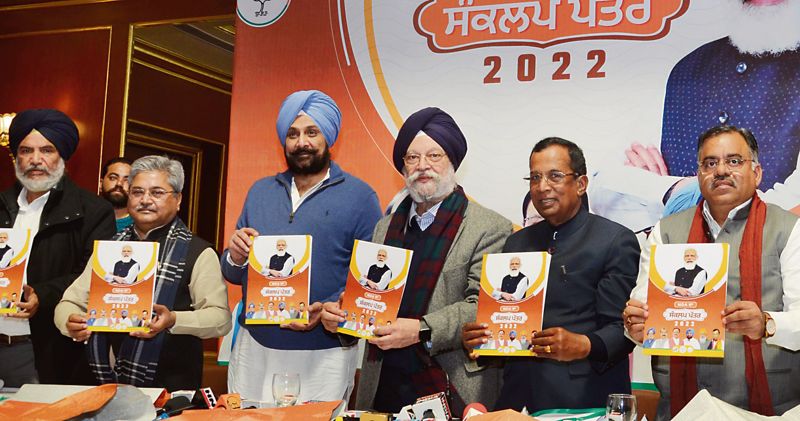 The BJP-led National Democratic Alliance, in its vision document for Punjab for the next five years, today promised 75% and 50% reservation for Punjabis in government and private jobs, respectively, Rs 4,000 allowance for all jobless graduates for two years and 35% quota for women in all government jobs.

Union Minister Hardeep Singh Puri along with key functionaries of the party, and alliance partners PLC and SAD (Sanyukt) unveiled the manifesto, which focused on employment, sacrilege, sports and law and order.

It promised infrastructure development fund of Rs 1 lakh crore to be spent over five years to revive the state economy, free electricity up to 300 units to all households and increased cash awards for sportspersons.

Results to be different from buzz created

The results in Punjab will be different from the popular perception created by the media during these elections. —Hardeep Puri, Union Minister

Besides focus on law and order and cross-border terrorism, it promised steps to curb drug menace. Domain experts in law, forensics, digital forensics, information technology would be recruited in all police stations for better services to citizens. Cyber Defence Headquarters would be set up for prevention of cyber crimes and 24 hours surveillance of cities through CCTV cameras would be started, it promised.

To tackle the problem of drug smuggling, a cross-state strategy involving J&K, Haryana, HP and Rajasthan would be formulated. A compensation of Rs 5 lakh would be given to each family affected by terrorism, it said.

The alliance promised free power up to 300 units to each household and a flat tariff of Rs 3 per unit beyond the threshold.

The state government’s decision to delink the salaries of teachers in government colleges and universities to UGC salary structure would be withdrawn. The recommendations of the UGC’s 7th pay commission would be implemented at the earliest.

Funds would be provided from the state budget for payment of postmatric scholarship dues to SC students, it said.