No breakthrough in talks, protests on 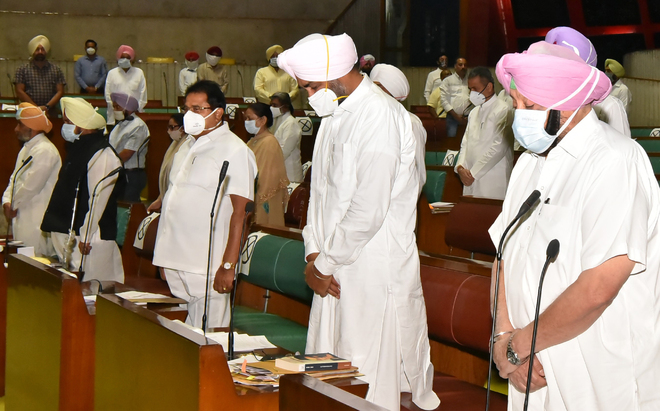 Capt Amarinder Singh and other members pay homage to farmers who lost lives during the stir. Tribune Photo

A meeting between a three-member Punjab Cabinet ministerial panel and the leadership of the state’s largest farmer union,

The protesters said they would continue with their agitation until they were satisfied effective steps had been taken to counter the three agriculture laws passed by Parliament. At the meeting, the 15 representatives from the BKU (Ekta Ugrahan) demanded that the Montek Singh Ahluwalia report, submitted in August, be disregarded.

references got over in the Vidhan Sabha. The aim of the meeting was to convince the farmers to scale down their agitation. The union had earlier threatened to gherao the Vidhan Sabha, but after receiving calls for talks, they cancelled the gherao.

Union president Joginder Singh Ugrahan said their protests would continue until the farmers were satisfied with the action taken by the government to counter the Central Government’s agriculture laws. “We also want the Congress government to withdraw the amendments made by the state government in 2017 to the Agricultural Produce Market Committee (APMC) Act, and monetary compensation for those who died in the agitation,” the union president said.

Earlier, the protesting farmers had threatened to gherao the Vidhan Sabha.

Later, the three ministers told The Tribune they had accepted the union’s demand for getting all cases registered against farmers cancelled before Diwali.