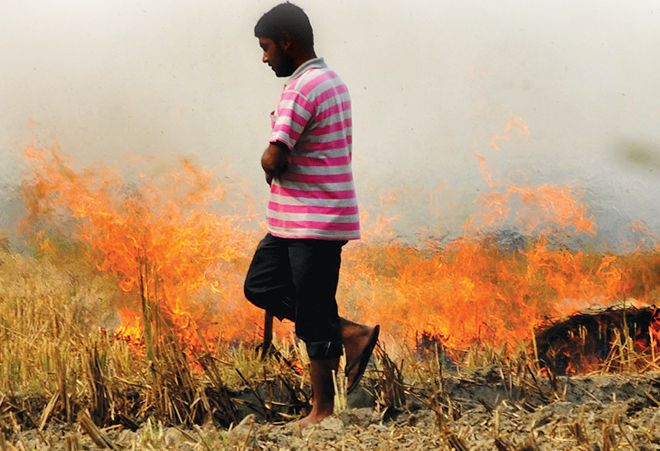 Farmers of the Malwa region are yet to receive a compensation of Rs 2,500 per acre, promised by the state government last year for not burning paddy stubble. Expressing their inability to manage the residue ahead of another paddy harvesting season, farm unions have decided to burn it.

Government did not fulfil its promise

After the government announced last year that farmers will get a compensation of Rs2,500 per acre for not burning the stubble, I somehow managed the expenses for its management. However, I didn’t receive the compensation. - A Farmer

Harbansh Singh (name changed), a marginal farmer from Ralla village in Mansa district, said: “After the state government announced last year that farmers will get a compensation of Rs 2,500 per acre for not burning the stubble, I somehow managed to bear the expenses for its management. But to my utter dismay, I didn’t receive the compensation.”

He said he could not afford to bear additional input cost this paddy harvesting season. “I know stubble burning causes pollution, but I have no other choice. If the government, despite having resources, cannot come up with a viable solution to the problem, what can small-scale farmers like me do?” said Harbansh.

Gurdeep Singh, a farm union leader in Mansa, said, “Slapping challans and fixing responsibility on farmers alone will not produce the desired results. If the government is genuinely concerned about containing the problem of pollution caused by stubble burning, it has to provide compensation or some form of bonus to farmers for managing the paddy residue. Last year, many farm unions demanded a compensation of Rs 200 per quintal to manage the residue, but to no avail.”

Singara Singh Mann, state president of the BKU (Ugrahan), said, “Only a handful of farmers received the compensation amount last year. Not every farmer can afford to bear the expenses for managing stubble on his own. The government should either come up with a viable solution or provide compensation to farmers, so that they can manage stubble on their own.”

Bahadar Singh, Chief Agriculture Officer, did not respond to calls.