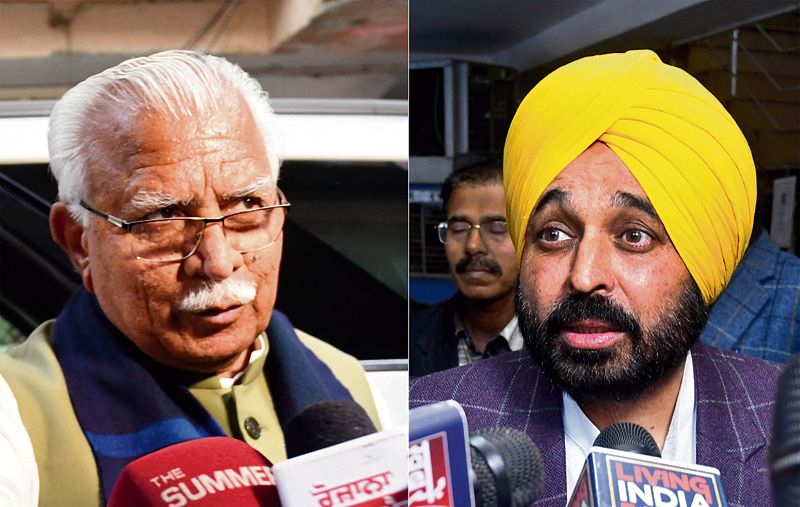 The decades-old issue regarding construction of the Sutlej-Yamuna Link (SYL) canal for river water-sharing between Punjab and Haryana was nowhere near resolution on Wednesday with a crucial meeting of the chief ministers of the two states called by the Centre to evolve a consensus remaining inconclusive.

At the meeting convened by Union Jal Shakti Minister Gajendra Singh Shekhawat, as per the directions of the Supreme Court to resolve the matter through mediation, Punjab Chief Minister Bhagwant Mann said the state “could not share what it did not have”. “How can we agree to build the SYL canal when we do not have even a drop of water to spare? We have asked for the nomenclature of SYL to be changed to YSL to save the Sutlej, which has been reduced to a mere nullah. If the Yamuna can go to Shahdara (Delhi), why can’t it go to Rohtak? The only solution is that the YSL canal waters from the Ganga and Yamuna be supplied to Punjab through the Sutlej,” Mann said, arguing that over 78 per cent of the state’s 150 blocks were in the dark zone with even the groundwater drying up.

How can we agree to build the SYL canal when we don’t have a drop of water to spare? — Bhagwant Mann, Punjab Chief minister

Punjab is not cooperating and the CM (Mann) has refused to accept SC order. — ML Khattar, Haryana CM

Haryana Chief Minister ML Khattar said “Punjab was not cooperating”. “The Punjab CM has refused to accept the SC decision by saying today that the Punjab Termination of Agreement Act, whereby it had unilaterally terminated the 1981 agreement with regard to river water sharing with Haryana, still stands. The SC had declared that Act null and void. We will inform the SC and it should take a decision. It will be acceptable to all,” Khattar said.

The Haryana CM said the question today was not of water distribution and sharing since a separate tribunal had been formed for that purpose. “The issue is the construction of the SYL canal. The entire water distribution structure based on the pre-Partition ratio is already accounted for. Once the SYL canal is constructed, water will be shared between the states on a pro rata basis,” he said, citing the government’s March 24, 1976, order whereby 3.5 MAF (million acre feet) of water was allocated to Haryana out of the surplus water of the Ravi and the Beas.

“Due to non-completion of the SYL canal, Haryana is getting only 1.62 MAF of water. Punjab is illegally using about 1.9 MAF of water from Haryana’s share by not completing the canal in its region,” Khattar said. The Punjab CM, however, argued that the pre-Partition terms did not hold good today. “When the SYL canal agreement came into being, Punjab was getting 18.56 MAF of water, which was now down to 12.63 MAF. So we have no water. Haryana is getting 14.10 MAF of water from the Sutlej, Yamuna and other rivulets whereas Punjab is getting only 12.63 MAF,” Mann said. Jal Shakti Minister Shekhawat told The Tribune that the ministry had done its part by trying to evolve an amicable solution. “But the meeting remains inconclusive. We will inform the Supreme Court accordingly at the next hearing,” Shekhawat said.

The SC has listed the issue for January 19. It had last September given the Centre four months to get Punjab and Haryana to arrive at a mediated settlement. Shekhawat convened two meetings (one in October and the other today), but both remained inconclusive.

The water dispute started in 1966 when Punjab and Haryana came into being after the Punjab Reorganisation Act.