Oppn candidates attacked, booths ‘captured’ at many places in Patiala 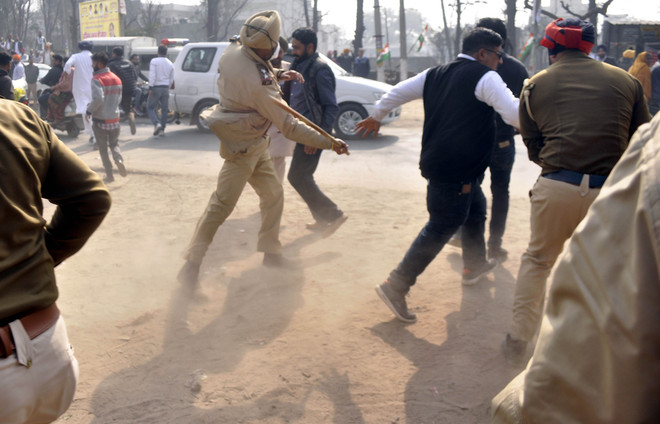 Despite the government’s assurance of free and fair polls, unidentified men barged into booths, polled bogus votes and attacked Opposition candidates and their supporters in the presence of police in towns of Patiala. Reports of violence came from Nabha, Rajpura, Patran and Samana. At various booths, AAP and SAD workers alleged Congress workers manhandled them in the police’s presence and no one was arrested.

AAP and SAD workers alleged Congress workers manhandled them in the police’s presence. In Rajpura, despite a heavy deployment of police personnel, miscreants allegedly captured a polling booth at DAV School.

The polling was briefly halted following the protest by one of the candidates and his supporters. In the meantime, Patiala SDM Charanjit Singh and Superintendent of Police Harmeet Hundal reached the polling station, following which the polling resumed.

BJP’s Parveen Chabhra, former president of the Rajpura Nagar Council, alleged: “With the police’s help, goons of the Congress captured booths.” The SDM said: “Strict action will be taken after identifying the miscreants.”

Rajpura SAD leader Surjit Singh Garhi accused the Congress MLA and his supporters of capturing booths by attacking party workers. Meanwhile, Congress leaders claimed that AAP and SAD were alleging foul play as they were losing the elections.

In Samana, the police had to resort to lathicharge when a brawl broke out following allegations of booth capturing by rival parties. Youths with covered faces attacked and ransacked the helpdesk set up by Independent candidate Darshan Kumar Mittal at Public Senior Secondary School, ward No. 4. The mob also manhandled a photo journalist as the police remained a mute spectator.

At ward No. 10, Congress supporters alleged the polling station — the office of Punjab Power Corporation — was captured by supporters of an Independent candidate. SP Palwinder Singh Cheema who reached at ward No. 10 dispersed the crowd as the police resorted to a mild lathicharge to control the situation.