Over 34K migrants leave Punjab in 6 days : The Tribune India 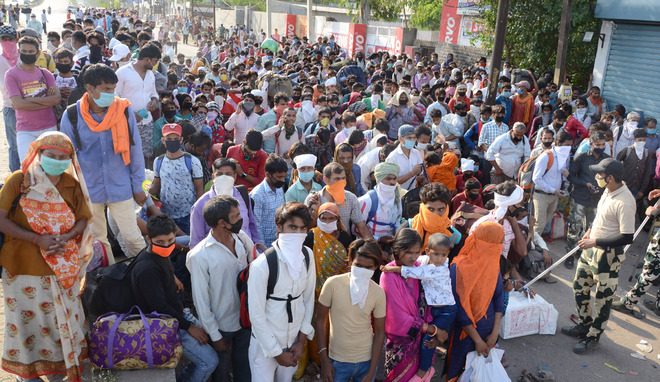 Not maintaining social distancing, migrant labourers and their families wait to be transported to the railway station in Jalandhar on Sunday. Tribune Photo: Sarabjit Singh

The Ferozepur Division has pressed into service at least 30 trains from various parts of the state to carry 34,436 migrant workers to other states during the curfew period. While the passengers did not have to pay for the tickets, there are reports some of them had to travel the long journeys back home allegedly without food and water.

On Sunday, 4,768 migrants were sent to their hometowns on four special trains. At least, 1,200 migrants left from Ludhiana to Hardoi (UP), 1,200 from Jalandhar to Sultanpur (UP), 1,168 from Amritsar to Barauni in Bihar and 1,200 from Ludhiana to Betia (UP), railway officials said.

Since May 5, 26 trains have been sent to Uttar Pradesh, Bihar and Jharkhand for Gonda, Azamgarh, Hardoi, Purnia, Gorakhpur, Lucknow, and Daltonganj, carrying 23,075 migrants till May 9.

The Railways arranged for the coaches on the demand of the state government with all adequate arrangements at their own after screening by the health officials, besides deploying railway police force officials to ensure the safety of the passengers up to their destination.

All other arrangements such as the payment of tickets, food and water on the way were to be made by the state government. The officials claimed the Railways had given a subsidy of 85 per cent on the fare.

Meanwhile, the passengers who reached Bareilly from Ludhiana after an 11-hour journey on Wednesday complained that they were not provided food and water despite assurance by the Punjab Government.

The District Magistrate of Ludhiana sent an SMS on the mobile phones of migrants registered for travel, asking them to carry food and water for the journey, saying the travel would be dependent on their medical screening. All workers carried a medical certificate to get clearance for the journey.