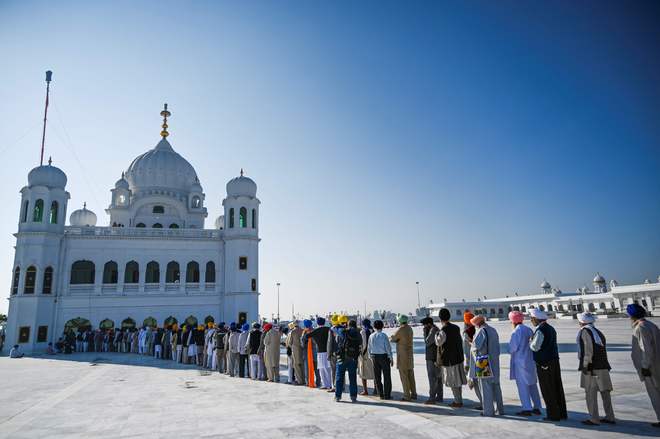 In a first since Kartarpur corridor came into being, the Jyoti Jot (death anniversary) of Guru Nanak Dev has been scheduled to be celebrated at Gurdwara Darbar Sahib, Kartarpur Sahib.

The event holds significance as it was the resting place of Guru Nanak Dev that falls on September 22, 1539, as per the original Nanakshahi calendar.

The decision was taken during the meeting by the Pakistan Sikh Gurdwara Parbandhak Committee (PSGPC) and the Evacuee Trust Property Board (ETPB) jointly today.

Talking to The Tribune over phone, Satwant Singh, president of PSGPC, also took an opportunity to appeal the Indian government to open the Kartarpur corridor from Dera Baba Nanak side for the Indian pilgrims between September 20 and 22.

“It is for the first time that we have been commemorating this occasion since the Kartarpur corridor was opened. We appeal the Indian government to open the Kartarpur corridor from its side temporarily for three days between September 20-22 so that the Indian pilgrims could participate in this historic occasion on which is being commemorated on September 22 for the first time since opening of the corridor. We earnestly appeal that at least 5,000 pilgrims from India should commemorate this occasion jointly with us,” he said.

“SGPC can play a vital role in making it possible. We also request the SGPC to send the raagis and kirtani jathas of Golden Temple to recite Gurbani on the occasion,” he said.

Due to covid-19 threat, the movement of pilgrims was restricted temporarily. Though, Pakistan had reopened the Shrine since June 29, the Indian government had continuously suspended the pilgrimage registration to Kartarpur Gurdwara since March 16 in view of pandemic threat.

Singh said the PSGPC and ETPB would look after the arrangements for the visiting pilgrims jointly as per the health guidelines keeping in view the Covid-19 spread.