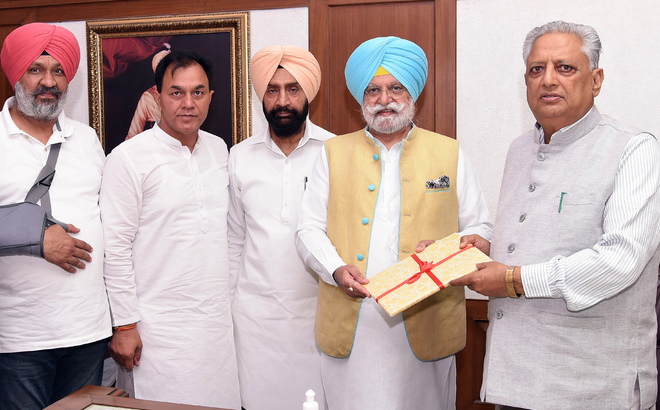 With Punjab headed towards desertification by 2037, the only way to conserve water is by agricultural zoning of the state and by metering groundwater.

These are the major recommendations of the special Vidhan Sabha committee, which submitted a report to Speaker Rana KP Singh here today, suggesting that a policy on groundwater extraction and recharge be brought out.

With irrigation for agriculture being the major source of groundwater depletion, the committee has now recommended that the state be divided into agricultural zones, with certain arid or dry areas being brought under horticulture crops (in Kandi area) and under cotton (in South Malwa), with at least 7.50 lakh hectares under the “white gold”.

This will help in less extraction of groundwater vis-à-vis a scenario where MSP regime and easy availability of groundwater through tubewells is weaning all farmers across Punjab towards paddy. Interestingly, this recommendation of agricultural zoning was also made in the report on crop diversification submitted to the Centre by the state government.

Another crucial recommendation is to start metering the groundwater supply, initially for domestic supply and later for the agricultural supply. There should be an audit on demand and supply in agriculture and industry, which should form the basis of a water credit scheme. “Farmers and the industry that reduces the usage of water would earn credit points, which can then be rewarded through concessions,” said Rana Gurjit Singh.

The Punjab Water Regulation and Development Authority, constituted by the Capt Amarinder government two years ago, had recommended levying of charges for extraction of groundwater for commercial and industrial use. But this has so far not been implemented. With elections to the state assembly round the corner, it is unlikely that a decision on this be taken soon.

Various studies have shown that 17 per cent of tubewells are now dug as deep as 600-650 metre as water is not available in the first 300 metre of the aquifer. “Thus, there is urgent need to reassess the use of groundwater and take immediate steps to prevent the desertification of Punjab, which is expected in next 25 years if the groundwater extraction continues at the current rate,” said Harparatap Singh Ajnala, a member of the special committee.

The committee has recommended that an extensive study be carried out on the extent of water recharged, though some reports suggest that only 20 per cent of the rainwater is recharged.