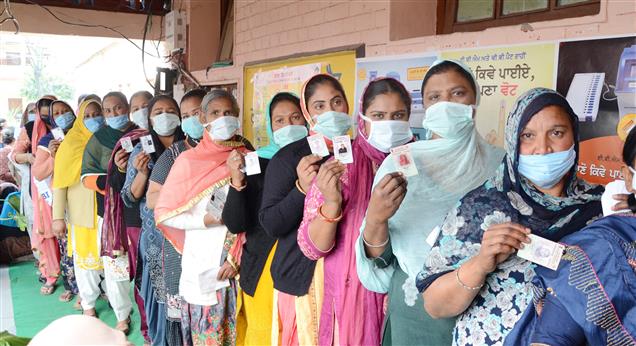 Despite different post poll survey reports released this evening predicting a clear majority to the Aam Aadmi Party (AAP), workers and leaders of various parties are adopting a guarded approach, citing the example of the 2017 elections when the surveys had gone “horribly wrong”.

The biggest issue in accepting the results of poll surveys is the small size of the people surveyed. Also, the voter may not reveal the party he has actually voted for. A senior Congress leader

Certain exit polls in 2017 had predicted the formation of an AAP government in Punjab. However, the party failed to cross the 20 mark. There were others that showed the AAP in a direct contest with the Congress. However, the latter sprung a surprise by bagging 77 seats. Chief Minister Capt Amarinder Singh had himself expressed “total surprise” at the results.

Similarly, India-Today Axis poll had given 42-51 seats to the AAP, while it gave only 10 to the SAD. The AAP was shown as the major party in at least three surveys, including India Today Axis (42-51), India Today CVoter (41-49) and ABP Lokniti CSDS (36-46). However, the Congress won the 2017 Assembly elections with a clear majority, bagging 77 seats. The AAP won 20, the SAD 15, BJP three and Independents two. The 2012 Assembly elections were won by the SAD-BJP alliance.

Reacting to variance in the exit poll and the actual outcome, a senior Congress leader said: “The biggest issue in accepting the results of poll surveys is the small size of the people surveyed. Poll surveys is a specialised job and I am not sure how many can afford a fully professional team. The voter is also smart these days and may not reveal the party he has actually vote for. There is no guarantee of them telling the truth.”

Daljit Singh, a Sanyukt Samaj Morcha worker, said: “The results of poll survey differed last time. We were very surprised with the final results. The important thing this time is that all poll surveys have given a clear majority to the AAP, so it may be true.”