Parts of Punjab, Haryana experience rain, but temperature remains normal in most areas : The Tribune India

Parts of Punjab, Haryana experience rain, but temperature remains normal in most areas 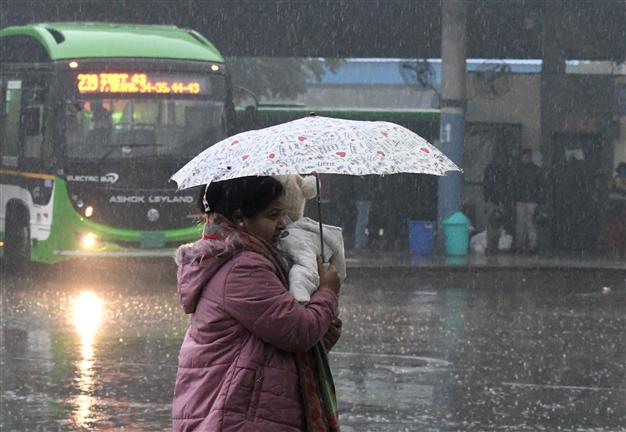 Woman carrying her child in rain at ISBT Sector 43 in Chandigarh on Tuesday. Tribune Photo: Vicky

Many parts of Punjab experienced light to moderate rainfall and thundershowers over the past 24 hours, with some areas witnessing day temperatures that were a couple of degrees below normal.

As many as 13 districts received varying amounts of rainfall. Hoshiarpur was the wettest with 44 mm rain, followed by Pathankot with 28 mm and Jalandhar with 16 mm, according to data compiled by the India Meteorological Department (IMD).

While day temperature in most parts of the state was normal, the deviation in a few pockets was 0.4 to 2.8 degrees below normal. Minimum temperature remained normal to above normal by up to 8.4 degrees in some areas. Dense fog was also reported from isolated pockets in the state.

In Haryana, light to moderate rainfall or thundershowers occurred at isolated places with dense to very dense fog reported from isolated pockets from the state. Hisar, Ambala, Kaithal and Yamunanagar were the only districts that received rain ranging from 10.8 mm to 0.5 mm, according to IMD.

According to IMD, a western disturbance over north Pakistan and adjoining Afghanistan in lower to middle tropospheric levels along with an induced cyclonic circulation over Punjab and neighbourhood is resulting in rain and snow over the western Himalayan region.

No significant change in minimum temperatures is likely over most parts of northwest India during the next 24 hours. There will be a fall by 2-4 degrees Celsius for the subsequent two days and thereafter a rise by 3-5 degrees Celsius in the subsequent two days. Dense fog is also very likely in isolated pockets in morning hours over Punjab and Haryana.