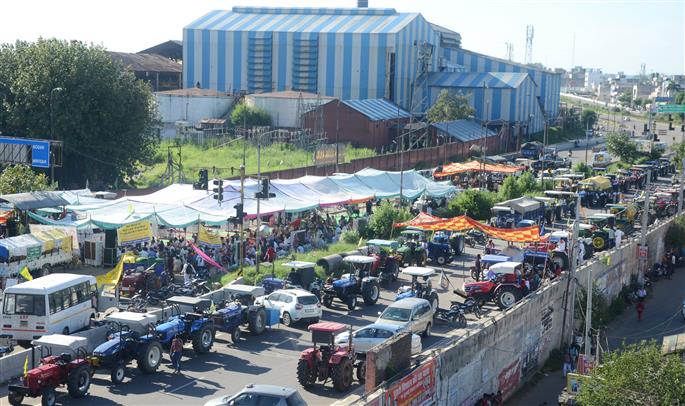 The entire stretch of the National Highway in front of Golden Sandhar Sugar Mill in Phagwara was blocked by the cane farmers on Friday. Sarabjit Singh

In an intensification of the farmers’ dharna against the government over non-payment of sugarcane dues by the Golden Sandhar Sugar Mill in Phagwara, farmers today blocked the second side of the Jalandhar-Phagwara National Highway also. School buses and ambulances are being allowed to pass through the dharna so far.

We will not move until all the farmers’ dues are paid and the mill begins functioning again. If the government doesn’t listen, a huge gathering of farmers, involving all 31 unions of the SKM, will be held in Phagwara or elsewhere — as decided — on August 25. — Davinder Singh Sandhwan, Vice-president, BKU Doaba

Hundreds of tractors descended on the Jalandhar-Phagwara highway this morning. In keeping with their declaration that the highway would be completely blocked if the government doesn’t relent to their demands by Raksha Bandhan (which was on Thursday), farmers from across Doaba brought in their tractors.

To step up the dharna, 31 unions of the Samyukt Kisan Morcha (SKM) will hold a huge protest on August 25 following which the dharna will be spread to other areas of the state.

The SKM has also decided that 10,000 farmers from Punjab will be heading out in a ‘jatha’ to Lakhimpur Kheri to demand action against the mowing down of farmers.

With dues worth Rs 72 crore of farmers for the past three years pending with Golden Sandhar Sugar Mill, farmers have demanded that these be cleared at the earliest.

Farmers warned of a Delhi-like dharna on the Phagwara highway and more roads on the stretch if the government did not listen to them.

All farmers’ organisations have been directed to bring tractors from their villages. Some villages brought two to five tractors. In all, 59 tractors were brought from Phillaur-Goraya region alone.

While the dharna is being held on a joint call of 31 farmers’ unions of the SKM, it had begun on August 8 on the call of Manjit Singh Rai, president of the BKU Doaba.

Representatives of various unions had a meeting regarding the dharna at Kapurthala today. Other outfits such as the Potato Growers Association also brought their tractors to the Phagwara highway in solidarity with the dharna.

Davinder Singh Sandhwan, vice-president, BKU Doaba, said: “We will not move until all farmers’ dues are paid and the mill begins functioning again.

“If the government doesn’t listen, a huge gathering of farmers, involving all 31 unions of the SKM, will be held in Phagwara or elsewhere — as decided — on August 25.

“Until August 25, the dharna at Phagwara will stay put along with scores of tractors that are still coming. On August 17, SKM ‘jathas’ of 10,000 farmers will also head to Lakhimpur Kheri. They will stay there on August 18, 19 and 20 and return on August 21 in time for the protest on August 25,” said Sandhwan.

While the long line of tractors indicates to the expansion of the dharna, cots were also laid on the highway and langar vehicles were set up on the site.