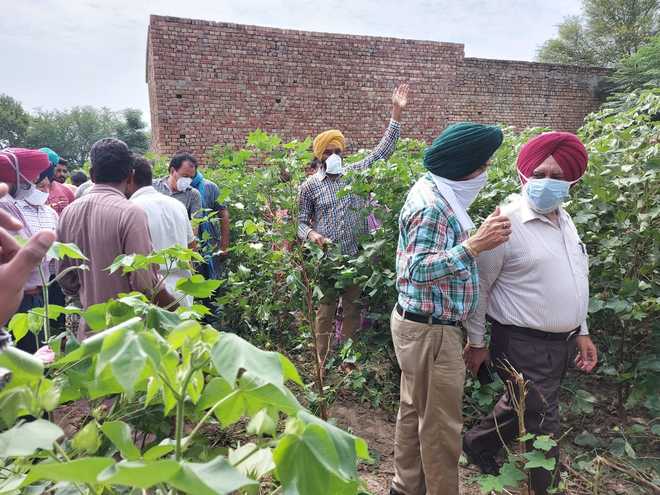 Around 100 acres of cotton crop has come under pink bollworm attack in Jodhpur Romana village in Bathinda district. Farmers alleged that cotton bolls were disposed of after removing fibre by cotton factory units, which resulted in infestation by the bollworm.

Aggrieved farmers under the banner of the Bharatiya Kisan Union (Mansa), gheraoed the officials who visited the affected fields. The officials inspected cotton factories situated adjacent to the infested fields and also held a meeting with owners of seven cotton units.

Fazilka: Cotton and paddy crop on around 7,000 acres has been damaged due to stagnant rainwater in six villages in Jalalabad. Rainwater and overflowing Bamb seepage drain water entered the fields nearly 20 days ago, which has not been drained out by the administration so far. OC

Gurmeet Singh, who had taken land on a lease, said, “My crop has been severly affected. I had been spraying pesticide every alternate day to save the crop from bollworm attack, but it has barely helped.”

Dr Bahadur Singh, Chief Agricultural Officer, Bathinda, said, “After conducting the survey, the department will start spraying insecticides to prevent further spread of pink bollworm attack. We will ensure round-the-clock surveillance of the area to minimise the damage.”