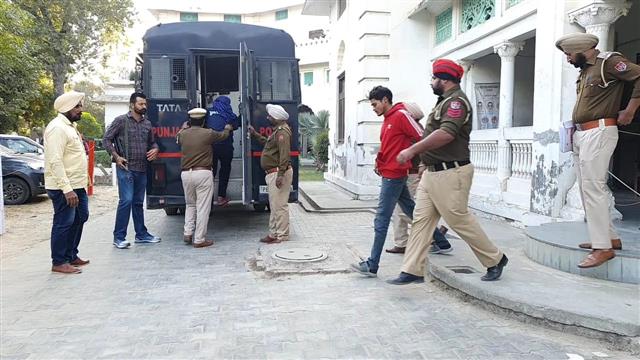 An accused being produced in a Faridkot court on Wednesday.

The police on Wednesday invoked the Unlawful Activities (Prevention) Act (UAPA) against the accused in the killing of Dera Sacha Sauda follower Pardeep Singh of Kotkapura. Pardeep was killed by six assailants on November 10.

The police claimed that investigation into the role of Bhola Singh, an accused in the case, revealed that he, in connivance with Canada-based Goldy Brar and others, had planned the attack with the intention of creating terror among a particular section of society due to which they had decided to invoke the provisions of the UAPA in the case.

Bhola Singh is the brother-in-law of Manpreet Singh Manni, one of the six assailants. The investigation revealed that Bhola Singh of Jeon Singh Wala village, who is languishing in the jail for the past over six months and is facing several criminal cases, had established contact with Canada-based Goldy Brar to plan the killing of the dera follower to spread terror among members of a particular community. To execute the killing, Bhola Singh engaged his brother-in-law Manni, who further roped in Bhupinder Singh of Faridkot for the purpose. Bhola Singh was accused of attempting to wage a war against the country and promoting enmity between groups, the police said.

Provisions of the UAPA are usually invoked in cases of terrorism when there is evidence that a crime was carried out as part of a conspiracy to target national integrity.

The UAPA gives the police custody of suspects for 30 days and 180 days to conduct investigations before filing a chargesheet instead of 90 days in other crimes. The law is also stringent when it comes to granting of bail to the accused.

“The police have already brought Bhola Singh on a production warrant and he is currently in the custody of the Faridkot Police,” said Raj Pal Singh Sandhu, SSP, Faridkot.

After questioning Bhola Singh, the police on Wednesday arrested Pawandeep Singh of Hari Nau village. The police claimed that Pawan had provided logistic support and weapons to the accused. It has recovered 50 live rounds of cartridges from him. The police claimed that it had started the process to bring Ramjan Khan, alias Raj Hooda, who was nabbed in Jaipur after a brief encounter with the AGTF this week.

Bhola Singh is facing five criminal cases, including a murder in Taran Tarn. He was also an accused in a murder bid on a dera follower, Shakti Singh, on October 2 last year at Daggu Romana village in Faridkot. Shakti Singh is one of the accused in the sacrilege cases of 2015.