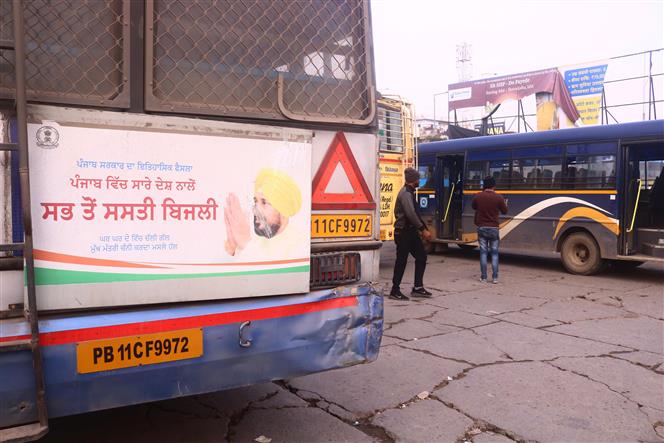 Code Violation CM Charanjit Singh Channi's ad on the rear of a PRTC bus in Patiala, on Wednesday. Rajesh Sachar

Chandigarh: A day ahead of the meeting of the Congress central election committee to finalise the first list of Punjab candidates, the party's screening committee headed by its chairman Ajay Maken met virtually on Wednesday. Committee members are learnt to have been informed about nearly 70 names that had been finalised and more than one candidates on nearly 20 seats. There are seats like Kharar, Dera Bassi, Garhshankar and Ropar where CM Channi and Navjot Sidhu have been supporting different candidates.

Abohar: Following directions from the State Election Commission, the Abohar Municipal Corporation has removed billboards, banners and posters put up by various political parties. Officials said employees of the civic body had a tough time removing multi-coloured posters pasted by ticket aspirants of the Aam Aadmi Party on walls and power and telephone poles.