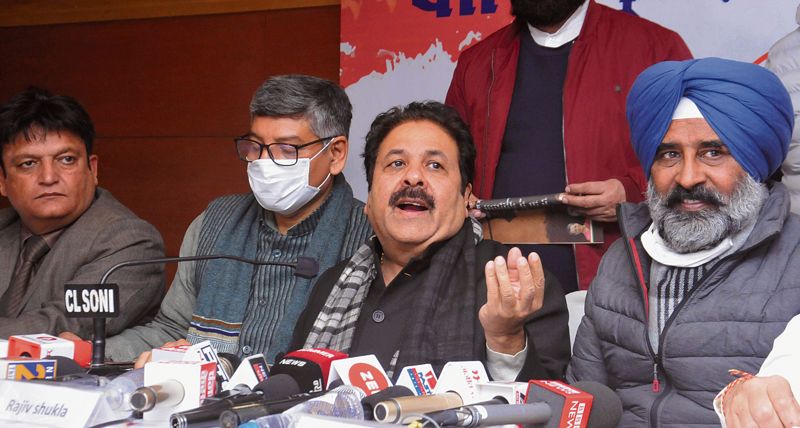 Wary of the BJP using the ED raid on the nephew of Chief Minister Charanjit Singh Channi in illegal sand mining case to build narrative of corruption in the Assembly polls, the Congress has changed the track of its campaign strategy.

Delaying its plan to project Channi as the leader and a serious contender for the CM face, party strategists are taking BJP head-on while building up anti-Punjabiat and anti-Dalit narrative against the saffron party. They are using examples of central agencies being used in other poll-bound states to threaten and pressurise political opponents.

Senior AICC leaders Randeep Surjewala and Rajeev Shukla, besides others, landed in Punjab to address back-to-back meets on the alleged BJP-AAP collusion.

“The BJP is settling scores for what happened at Ferozepur during PM Narenedra Modi’s visit and failure of its rally. I have and always stood with Punjabis. They want to politically damage me. People of Punjab can see through the design of the BJP and AAP,” said the CM. A senior leader said, “after the AAP announced Bhagwant Mann as its CM face, the Congress is not under pressure to announce its CM nominee. Rather, we will project Mann as a non-serious CM, compared to tried and tested 111 days of Channi’s performance.”

Leaders privy to internal party discussion said ever since the controversial visit of the PM to Punjab and rising popularity chart of CM Channi, the ED raid is being seen as a move to puncture the Congress move to cash in on increasing his popularity to win the elections.

Yesterday, the INC purposely shared a short video of Sonu Sood on “who should be the CM”. The criteria mentioned in the video builds party’s narrative around Channi.

The Congress has already started working on a sustained campaign to project Channi as the future Punjab leader, even as party leadership has been officially maintaining that the elections would be fought collectively with Channi, Navjot Sidhu and Sunil Jakhar as leaders.

Sources said in the given circumstances, the party would counter the fresh salvo from the BJP by bringing Sidhu in taking on the saffron party.