Moreover, it had further increased the demand for potato as seed, said Rajinder Kumar, manager at a cold store in Faridkot 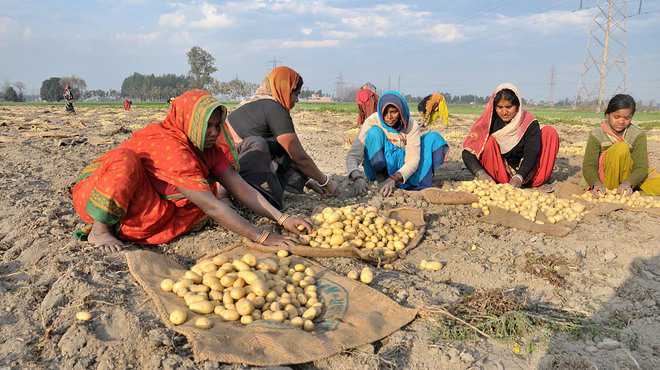 The unseasonal rain in January also led to an extensive loss to potato crop this year.

Potato prices in Punjab are soaring.

At present, in the state, potatoes cost Rs 35-38 kg in the retail market, and the prices of tuber will increase around Rs 4-5 per kg in the coming days.

Though, potato prices used to be the lowest during October-end—when all cold stores have to empty their stocks on the deadline of October 31—this time, due to the absence of adequate stock to meet the demand of consumers, and also of farmers, who need potato for seeding purpose, the prices are increasing.

Generally, the new potato crop hits the market in the mid-November, but this time due to high temperature in August-September month, about 50 per cent of the advance varieties sown in the last week of August either did not germinate or perished.

Moreover, it had further increased the demand for potato as seed, said Rajinder Kumar, manager at a cold store in Faridkot.

“The extended summer and high temperature will not only cause the delay in the arrival of the new crop but it will also adversely affect the production,” he said.

After mid-October, potato prices generally hit the rock bottom in this area when cold stores are in a hurry to empty their stores and the owners of this stock face problem of germination in the stored stock, so the old stock is sold at throwaway prices.

For the last few years, potatoes were sold at Rs 140-Rs 150 per quintal in the wholesale market in October-end.

After incurring losses in the last three seasons, potato growers had reduced the area under the crop sizably last season.

Market experts believe that the reduction in the area under potato cultivation and unfavourable weather conditions in January had resulted in increased potato prices this season.

The unseasonal rain in January also led to an extensive loss to potato crop this year.

A senior officer in the Agriculture Department said: “The arrival of the fresh potato crop in the market in the mid of November resulted in the fall of prices. But we are not expecting any fall in the prices this time due to delayed harvesting of the crop and declined yield due to high temperature in September.”