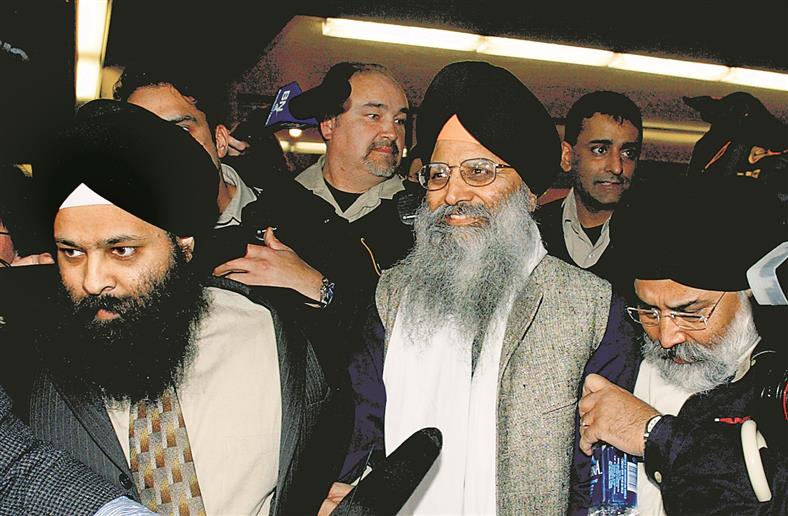 Ripudaman Singh Malik after he was acquitted of the charge. file

Ripudaman Singh Malik, who was an accused in the 1985 Air India Kanishka bombing case, may have paid the price for Prime Minister Narender Modi earlier this year.

The Intelligence Bureau has hinted that “the act could be part of ‘concerted efforts’ to use ‘unfair’ means to scare voices that dare to align with India”.

He had been called “kaum ka gaddar” (traitor) for having praised Modi, who declared December 26 as ‘Veer Baal Diwas’ as a tribute to martyrdom of Guru Gobind Singh’s sons.

A businessman and founder of the Khalsa Credit Union and Khalsa schools, Malik was among 312 Sikhs living abroad who had been barred from entering India for their alleged anti-India activities.

The media will always refer to him as someone charged with the Air India bombing. He was wrongly charged and the court concluded there was no evidence against him. — Jaspreet Singh Malik

His name was removed from the blacklist in September 2019, following which he visited India in December that year.

In June this year, Akal Takht Jathedar Giani Harpreet Singh was scheduled to visit Canada for three days. The programme included laying the foundation of Khalsa College. “The Jathedar’s visit to the Malik’s function was opposed by certain groups, who threatened to gherao the venue. Subsequently, the visit was cancelled.

Later, Malik called “anti-India elements as enemies of Sikhs” on a TV talk show. He said “these people worked on behalf of foreign governments”. Malik had announced a series of interviews, which were to begin on July 20.

Was acquitted in Kanishka bombing

“Malik had fallen out of favour with certain organisations in Canada and remained in the news for provoking them on different occasions,” a Calgary-based journalist said.

Malik had also courted controversy recently for being linked with the printing of the Guru Granth Sahib outside of India in contravention of the religious edict.

The Royal Canadian Mounted Police are yet to come out with an official statement on the killing. It has been quoted as saying that “the investigation is in the early stages and police are still looking for the suspect”. The police have said “the shooting appeared targeted”.

Ottawa: The Canadian police have said they have not established a motive for the killing Ripudaman Singh Malik or have evidence to suggest whether the incident was connected to the airline attack. “We understand this is a high-profile international story. However, we urge not to speculate as to the motive, as our homicide investigators will be following the evidence,” they said. Sources say Malik has had a number of personal disputes with individuals over the years. — Agencies