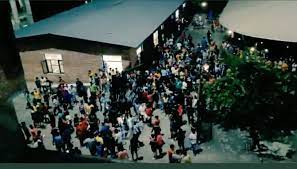 Days after a controversy rocked Chandigarh University, Lovely Professional University (LPU) in Phagwara turned into a fortress today following a massive protest by students last night after a 21-year-old pupil from Kerala allegedly died by suicide. Ajin S Dilip, a student of first-year B-Design, was found dead in his hostel room on the LPU campus on Tuesday. A protest erupted on the campus hours after the incident with students raising slogans of “we want justice”.

In one of the notes, the student has stated, “I blame Prof Prasad Krishna for emotionally manipulating me into quitting NIT-C. I regret my decision so much. I’m being a burden to everyone. I’m sorry but this is it.”

The police have registered an FIR against the Professor for abetment to suicide.

While Ajin reportedly died at 4.30 pm, it was only about 9 pm that students learnt about the incident. Alleging delay in calling the ambulance, students took to the streets. The police had to resort to a mild lathicharge to restrain the protesters. The campus remained peaceful today. The students have demanded a fair investigation.

The LPU authorities released a statement today: “The police are investigating the matter. As per the suicide note recovered, the student has taken this extreme step because of the personal problems he faced in his previous institution at NIT-Calicut (Kerala), where he studied for two years.”