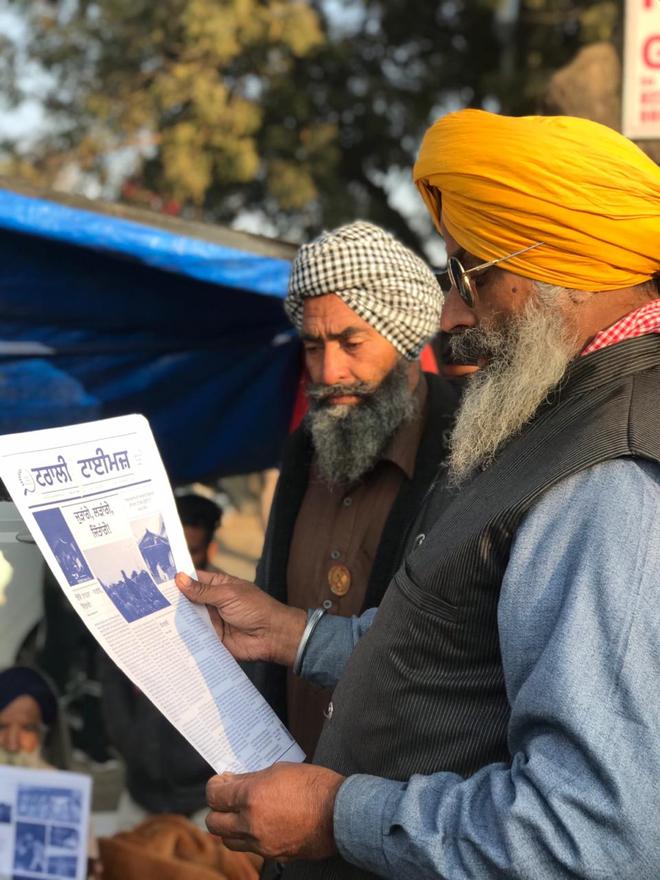 A farmer reads the ‘Trolley Times’ at the Singhu border.

Recently, sitting in a trailer, a group of four youngsters discussed a Facebook post at the Singhu border. An old farmer, sitting next to them, quipped: “Oye mundiyo tusi parhe likhe lagde ho, saanu vi dass do ki ho reha”. Thus the idea of Trolley Times was born. Farmers’ own newspaper.

Reporters were aplenty; an army of amateur photographers was ready with the feed, a trailer became their editing desk, and soon came out the first edition of 2,000 copies of four-page bilingual paper. It was an instant hit on Friday.

“Looking at the response, we are going to print 10,000 copies of the next issue,” says Ajaypal Natt from Mansa, a physiotherapy teacher. He along with Surmeet Mavi, Gurdeep Singh and Narinder Bhinder conceived the idea. The name, Natt says, was floated by one of us just out of fun. “But we instantly picked that,” he says.

The style of the paper, he says, will be conversational. “We want it to read like the discussions taking place in village sath (common place),” he says, adding “we have a platform now to counter all kind of trash being dished out by some sections of media.”

The first issue of the paper carried Bhagat Singh’s quote on struggle; photographs from the centre of the struggle; story of a woman farmer, Gurmail Kaur, who died during the protest; some works of art and the lead article gave the message of unity, struggle and victory. The paper