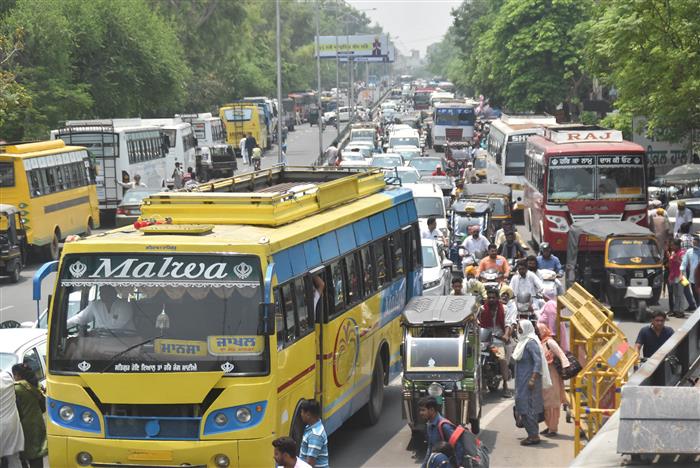 Commuters stuck in a traffic jam during a protest by PRTC contract workers in Bathinda on Wednesday. Pawan Sharma

Punjab Roadways Punbus PRTC Contract Workers’ Union staged a protest by blocking the main entrance of the city bus stand and raised slogans against the state government over ‘non-payment’ of salaries. Meanwhile, as Bathinda-Mansa highway remained choked with vehicles due to the protest, commuters had a harrowing experience amid heavy traffic snarls and humid weather.

Kulwant Singh, state vice-president of the union said, “In its pre-poll promises, Aam Aadmi Party leaders had said that after forming government in the state it will run departments efficiently, but now Punbus and PRTC workers have not been getting their salaries. Our salaries are getting delayed for past couple of months. We have not received salary for the month of June till now.”

“Apart from providing us salaries on time, the government must also regularise services of contractual workers. Employees suspended during agitations must be reinstated, all must get increment on salary, buses under kilometre scheme must be stopped and recruitment of staff on contract basis must end,” he said.

“We were assured by the state transport minister that in order to fulfil all these pending demands, a meeting with Chief Minister Bhagwant Mann would be scheduled in June, but that has not happened till now. Instead of fulfilling our long-pending demands, the government is planning to recruit workers on outsourcing basis and introduce buses under kilometre scheme,” he added.