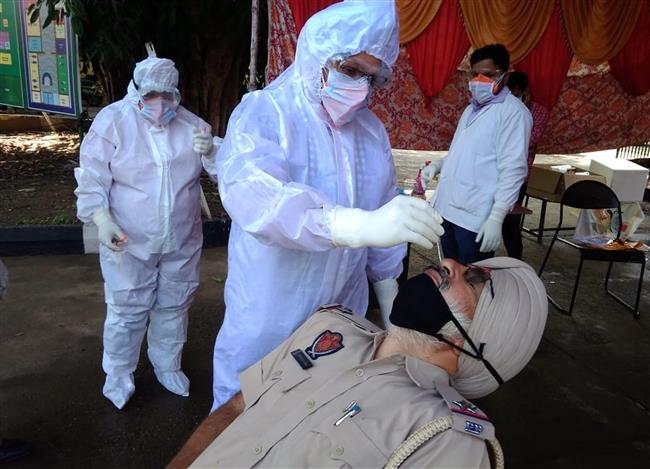 Punjab’s cases have been seeing a steady rise since the beginning of June. File photo

Punjab’s coronavirus numbers continues to spike with the state reporting 340 new COVID-19 cases and nine deaths---developments that take the state’s infection tally past 8,511 with 213 deaths.

Cases continue to pile on alarmingly in both Ludhiana and Jalandhar.

Thirty-three of Ludhiana’s 80 cases were contacts of older cases. Nineteen were classified as ILI (influenza-like illness), 14 were OPD cases, five as ANC, four were healthcare workers, two were domestic travellers, one was a policeman and two were jail inmates.

Jalandhar’s 80, 13 were classified as new cases---meaning cases without known contact or travel history---and three were contacts of previously diagnosed cases.

In Sangrur, two more residents have died due to Covid-19 during last 24 hour in district while the death toll has increased to 21 in district.  A 60-year-old woman from Sherpur block died at Ludhiana’s DMC Hospital on Tuesday. She was admitted on July 12 and was diabetic, and suffered from a chronic kidney disease and respiratory problems. The second was 55-year-old man from Malerkotla who died at Patiala’s GMC on Monday night. He was admitted to the hospital on July 4.

In Amritsar, a 62-year-old man from the city’s Partap Nagar area died of the virus. He was admitted at a private hospital.

Thirty-five of Patiala’s 51 were contacts of older cases and 15 were classified as new cases.

District officials however put the district’s coronavirus numbers at 78. It is common to find some disparities in the district and state numbers---differences that are primarily on account of cases being reported after the state numbers have been compiled.

Patiala’s cases have been rising alarmingly since the beginning of July. The district now has 723 cases---more than twice the 329 infections it had on June 30.

Of SAS Nagar’s 26, 17 were contacts, five were categorised as ILI, two as new cases and two were domestic travellers.

Of Amritsar’s 26, 14 were contacts of previously diagnosed cases, four were classified as ILI, three as new cases and the last patient recently returned from abroad.

In Sangrur, four policemen were among those testing positive.

Faridkot reported 12 new cases, all of them contacts of diagnosed cases.

Six doctors tested positive in the district, although these have not been added to the state tally yet.

Ropar had three doctors testing positive, but these have not yet been added to the state tally.

July alone has seen 2,943 cases being added to Punjab’s tally---about 34 per cent of its total cases.

Death toll has also similarly risen---the state has recorded 69 new deaths since the beginning of July.

Meanwhile, the bulletin shows that 54 people are on oxygen support and 11 are on ventilator support.