No ‘parchis’ required, only Aadhaar and mobile number needed 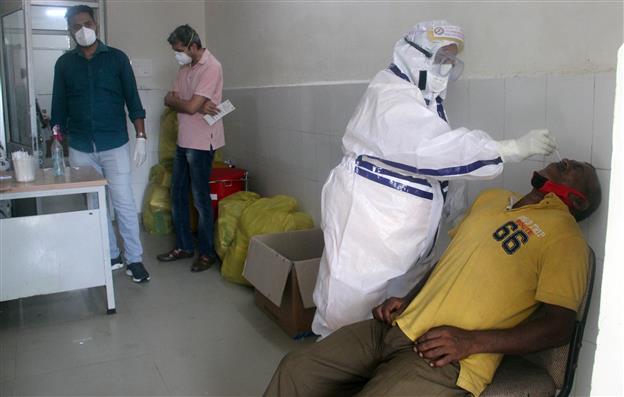 Punjab has decided to allow free walk-in testing in government hospitals and mobile vans, and similar testing at a nominal manpower cost not exceeding Rs 250 by private doctors and hospitals, to encourage increased Covid testing to check the surge in cases in the state.

People who want their result immediately can opt for Rapid Antigen testing while RT-PCR testing will also be similarly available.

The state will also explore similar arrangements for Rapid Antigen testing by pharmacists/chemists, on the lines of private hospitals and doctors.

The decision was taken on Thursday by Chief Secretary Vini Mahajan, who said the government will provide training and kits to private hospitals and doctors for the tests, which will be allowed on the basis of Aadhaar card and mobile numbers, without any questions asked or need for ‘parchis’. With test results available for RAT in 30 minutes, this will lead to substantial increase in testing and early diagnosis and treatment, she said.

Those who test positive through RAT or are symptomatic but negative can be tested again through RT-PCR test for confirmation, said the Chief Secretary, while reviewing the Covid situation with the DCs and Civil Surgeons of Patiala, Bathinda, Amritsar, Ludhiana, Jalandhar and Mohali districts.

The Chief Secretary also asked DCs to explore RAT testing at private hospitals and pharmacies/chemist shops, at a nominal manpower cost not exceeding Rs 250 per test, with proper training and kits to be provided by the government. The test results and data so collected by private hospitals and chemists, etc., can be uploaded on the government portal for further action, she added.

In another directive amid the surge in cases and deaths in Punjab, the Chief Secretary has also instructed that the 104 Helpline number should provide real-time information on bed availability district-wise. She directed the DCs and Civil Surgeons to ensure adequate supply of oxygen cylinders in their respective districts.

Vini asked the DCs to review city-wise or area-wise positivity rates to identify the hotspots better, with daily monitoring of the rates and week-to-week monitoring of trends. All the districts should have reasonable projections at hand for the month, she said, directing them to also collate urban-rural data to enable better formulation of the action plan to tackle the problem.

She urged the district authorities to work with private hospitals to make them partners in testing, and asked the DCs to set up meetings with these institutions through the IMA.

Taking note of the widespread rumour mongering and fake news being spread on Covid, Vini called for elected representatives to step in and reach out directly to the people to clear their misconceptions on the issue.

She also underlined the need to involve NGOs, religious organisations, etc., to spread awareness through expansion of the outreach. BDOs should be properly briefed and asked to reach out to the sarpanches in villages to counter the false propaganda, which was endangering lives of people, she added.

Health Secretary Hussain Lal underlined the need for extensive sampling and testing in the five worst affected districts of Ludhiana, Jalandhar, Patiala, Mohali and Amritsar, with focus on the 40+ age group.

Ludhiana DC Varinder Kumar said the district was focusing on sampling in urban areas, since 85% of the cases had been reported from these areas, especially among the middle class. The stigma attached to testing was high even though positivity rate in the district was less than 10%, with the Ludhiana city reporting 5% and industrial units around 1-2% positivity, he said, adding that psychological counselling for those in home isolation was also being provided.

On the issue of testing, the Mohali DC said delay or failure by private labs to upload data was causing serious anxiety and these labs were being directed to ensure timely release of the results on the online testing portals.