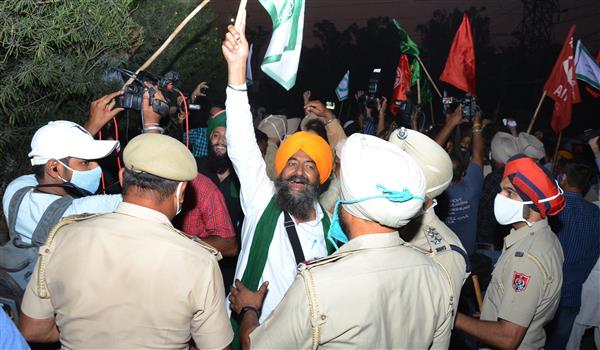 Protesters at the venue of BJP meeting in Jalandhar. Sarabjit Singh

A day after the Centre’s offer for talks, six farmers’ unions on Monday gheraoed the BJP meeting venue at Maqsudan in Jalandhar for over six hours and clashed with the police. Punjab BJP chief Ashwani Sharma and general secretary Subhash Sharma were among those present at the meeting.

In no mood to relent, the Bhartiya Kisan Union (Ekta-Ugrahan) insisted that the new farm laws must be repealed. The Kisan Mazdoor Sangharsh Committee too rejected the Centre’s offer, announcing that the protests would continue. “The proposed October 14 meeting at New Delhi will be an exercise in futility” opined Baldev Singh Latala, All-India Kisan Sabha, Punjab unit. However, the Jamhoori Kisan Sabha, and the BKU-Kadian are keen on negotiating with the Centre. — TNS