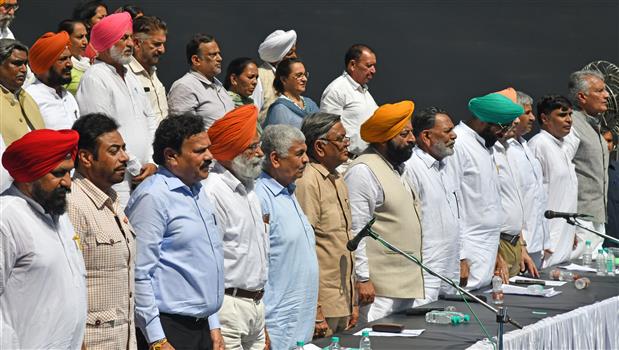 Holding a mock Assembly session, the BJP today put the government in the dock over the “unkept promises”.

In an elaborate arrangement, the party organised ‘Janata Di Vidhan Sabha’ in the parking lot of Batra Theatre next to the BJP’s office here. Like the real proceedings of the Assembly, a pro-tem speaker was elected following which former Deputy Speaker Ajaib Singh Bhatti was elected as the regular ‘Speaker’ of the mock Assembly.

The proceedings started with obituary references. Following that former MP Sunil Jakhar presented a resolution on the alleged corruption in the AAP government. While initiating the debate on the issue, Jakhar alleged that recordings of so many corrupt ministers and MLAs of the “honest” government had gone viral and more than half of the MLAs of the ruling party were facing criminal cases. Taking the debate forward, former MLA Fateh Jung Bajwa alleged that money collected in Punjab was being used in Gujarat and Himachal Pradesh.

Another BJP leader Parminder Brar said since coming to power 14 MLAs or minister were facing allegations of corruption.

Former Cabinet Minister Manoranjan Kalia and MLA Arvind Khanna flayed the government for failing to fulfil the promises made during the elections.