Govt says efforts on for doorstep delivery of milk, vegetables in cities 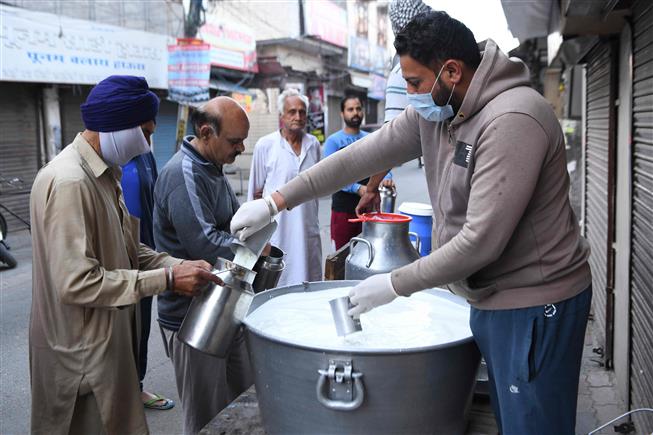 The first dawn of curfew in Punjab and Chandigarh brought with it anxieties for people wondering about whether or not they would get their essential supplies such as milk. The supplies were disrupted for the most part, but attempts were being made by district administrations to start deliveries at doorstep, at least in the cities.

Door-to-door supply of milk and vegetables was allowed in Faridkot, with the Deputy Commissioner issuing passes to vendors.

The Bathinda DC announced there would be no relaxation in the curfew on Tuesday in the district, but Verka would arrange door-to-door supply of milk in the city.

However, the supply of milk (including Verka) and essential items was severely affected in most parts of Punjab due to a lack of coordination between the district authorities and state government agencies responsible for supply of essential commodities.

Moga, Patiala, and Mohali too reported disruption in the supply of newspapers and milk. As much as 12 lakh litres of milk was reported lying at the Mohali Verka milk plant alone for want of pick up.

Officials said relaxation was not being given as people in many parts of the state were not taking the curfew seriously. Relaxation for short intervals was resulting in people coming out in large numbers in public places such as parks and markets.

They said it could take a day to streamline the process of distribution of essential items.

Chandigarh too reported similar disruptions, though newspapers were delivered in some areas.

Vendor union leaders came at pick up points to discourage the vendors from distributing newspapers.

Milk Supply also remained disrupted in the city. Only milk vendors from the rural belt could manage to supply milk at the doorstep in parts of the city.

The supply of essential commodities including milk and newspapers continued in early hours but was hit in some parts of Ludhiana. As it was rumoured that curfew will be relaxed for three-four hours, starting from 6 am, the residents were seen coming out of their houses. Those supplying milk were seen distributing milk/bread etc to their customers in many colonies/societies.

The suppliers said that at many points, they were stopped by the police but when they checked the bags containing basic commodities, the suppliers were asked to wind-up as early as possible. Many suppliers were seen taking alternative routes through narrow streets to reach out to regular customers.

Meanwhile, the hawkers were regular in distributing newspapers, even though the supply was hit in few parts of the city including outer areas, Dugri and few areas in Model Town.

Even few chemists had opened the shops in Ghumar Mandi, National Road, Civil Lines areas but within half an hour, they were asked to close around 8:30 am. The maids, who got calls from the employers, were seen reaching out to extend domestic help to the homemakers. However, they cut short their visit and preferred to reach back to the homes safely as cops were acting tough against all roaming on roads.

Many residents looked restless in the absence of ration/other necessary items. They tried to find if nearby shops were opened but had to return disappointed as everything was shut.