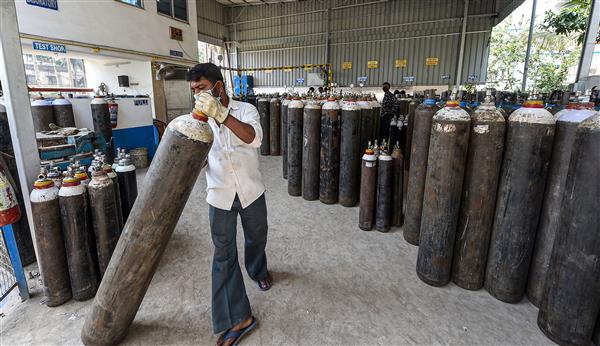 Punjab Chief Minister Amarinder Singh on Saturday ordered shutdown of operations in the state’s iron and steel industries to divert Oxygen for medical use, along with immediate establishment of Oxygen Control Rooms at the state and district levels amid the escalating Oxygen crisis in the state, where six patients died of O2 shortage at a private hospital in Amritsar this morning.

He has also directed Amritsar DC to initiate a thorough investigation into the tragic incident at the Amritsar hospital. The DC has been asked to ascertain the facts and circumstances leading to the deaths at the hospital, which prima facie seemed to have flouted orders given to all private hospitals with Oxygen shortage to shift their patients to Government Medical Colleges. The DC has set up a two-member committee, comprising a PCS officer, Dr Rajat Oberoi (Deputy Director Local Bodies), who is also in-charge of the death analysis committee, and a civil surgeon Amritsar, to probe the matter, an official spokesperson said later.

Taking stock of the situation in view of the Oxygen shortage being reported from various hospitals, and the fact that the current allocation to Punjab is not sufficient to meet the urgent needs, the Chief Minister said he had already taken up the matter with the Centre, seeking increase in quota on urgent basis, and Chief Secretary, Vini Mahajan, was following it up. Sudden influx of patients from neighbouring States had put added burden on oxygen requirement of Punjab, he noted.

Ordering closure of industrial operations at the iron and steel plants, the Chief Minister said the state government will convey its decision to the Centre. The Chief Minister has also asked for a feasibility report from the Power Department on use of thermal plants for providing oxygen for medical use.

Punjab has witnessed a sharp increase in demand over the past few days. Demand for Oxygen currently stands at 250 MT per day and is further expected to go up to 300 MT in the coming days on account of spiralling Covid cases.

The Chief Minister also directed that contracted oxygen supply under private hospitals may be reviewed to ensure that oxygen supply is optimally used and rationalised across the State. Reacting to reports of increase in the price of oxygen by suppliers, he asked PSIC to discuss, negotiate and settle the pricing with bulk suppliers and inform Principal Secretary, Medical Education & Research, on the final decision.

Principal Secretary Industries has been directed by the Chief Minister to urgently set up the State Control Room at Udyog Bhawan, Chandigarh, with support from Director Industries and Commerce, with other officers, as required, to be provided by the Personnel Department. The PS Industries has also been asked to get the control rooms in districts set up at the earliest.

The state control room will ensure that all oxygen supply from within Punjab and from outside is closely supervised and directly monitored by the government. The Chief Minister directed the Department of Health & Family Welfare and Punjab Police to provide all necessary support in this regard. The district level control rooms will map all oxygen vendors, suppliers, bottlers and re-fillers for each hospital, so that it can monitor and facilitate oxygen provision accordingly.

Vini Mahajan said later that two senior officers, Harpreet Sudan (IAS) and Rahul Gupta (PCS), are being posted to the state control room to coordinate all activities. In view of shortage of oxygen cylinders, all districts having industries with empty unused cylinders would be asked to use those, such that they can be refilled for medical use.