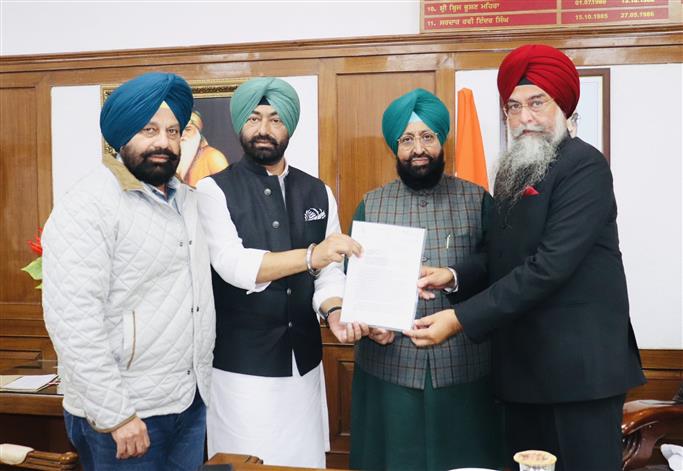 Senior Punjab Congress leader Sukhpal Singh Khaira along with party leader Partap Singh Bajwa met Assembly Speaker Kultar Singh Sandhwan here on Monday and sought to introduce a private member's bill in the next session to ban the purchase of agricultural land in the state by non-Punjabis.

This, Khaira claimed, is to "protect our identity and demographic balance".

Friends,met Speaker @Sandhwan with @Partap_Sbajwa LoP seeking to allow private members bill in VS to restrict non Punjabis from buy agri land in PB in order to protect our identity in view of large scale migration of our youth abroad,like the HP Land Reforms Act 1972-Khaira pic.twitter.com/eXCqBCscmB

"Today myself and Leader of Opposition Partap Singh Bajwa met Speaker PB seeking to introduce private member's bill in the next VS session to restrict/ban purchase of agricultural land by non Pb's in order to protect our identity & demographic balance as done by Hp 1972 Act," Khaira said in a tweet.

In the letter to the speaker, Khaira sought to introduce the bill "to restrict/bar non-agriculturist and non-bonafide Punjabis, from buying agriculture land in Punjab, as provided for in section 118 of the Himachal Pradesh, Tenancy and Land Reforms Act, 1972".

"We are not against non-Punjabis coming into our state for employment opportunities but yes, we have an issue with them settling permanently in Punjab, becoming owners of agriculture land, becoming permanent voters etc. as it endangers our distinct identity," Khaira said in the letter, which was released to the media.

Referring to the Himachal Pradesh Tenancy Act, 1972, to press his point of view, Khaira said there are provisions in accordance with the said act to set up industry or even buy agriculture land after following the due process of law.

Khaira, MLA from Bolath, sought enactment of a similar law like Himachal Pradesh, "to protect our identity and existence and that of our future generations".

"Therefore, I request that the private members bill submitted by me be tabled in the next session of Vidhan Sabha to enact a similar law like Himachal Pradesh, to protect our identity and existence and that of our future generations," wrote Khaira.

The letter to the Speaker mentions that there has been massive population migration of Punjabis to different parts of the world in search of better livelihood during the last few decades.

"As per rough estimates, approximately one-sixth of Punjab's total population of 2.75 crore, that is to say almost 50 lac of our people have migrated abroad.

"Unfortunately, this trend has further escalated during the last few years. Because of this trend of such massive migration, Punjab has not only lost its best educated, trained and skilled human resource, but it has also shattered the economy of our state," says the letter.

The Congress leader pointed out that a youth who migrate to countries such as Canada, USA, UK, Australia, etc., on the basis of a study visa, work permit or permanent residence basis takes along approximately Rs 20 lakhs to 25 lakhs and thereafter such remittances continue to flow out of Punjab.

"As a result, the economy of Punjab which already stands shattered due to a colossal debt is further being eroded drastically, particularly in the rural parts of Punjab. "Our agriculture land prices which were around 40-50 lakhs per acre a decade ago have dropped to less than half i.e., 15-20 lakhs per acre now," says the letter.

Apart from the negative financial impact on Punjab, due to the shift of population at such large scale, the demographic situation has also started to change drastically, the Congress leader claimed.

The letter pointed out that identity of Punjabis "is under a severe threat as lakhs and lakhs of non-Punjabis have started to reside permanently in our state".

"Apart from demographic threat, the exodus of our youth to other countries has led to sharp drop of Punjabis in central services and armed forces which is a matter of grave concern too.

"..if this trend if not nipped in the bud immediately, Punjabis particularly the Sikhs will be in a minority in their own motherland in the next 20-25 years," he said.

It was precisely because of this reason that states like Jammu & Kashmir, Himachal Pradesh and Rajasthan etc, in order to protect their identity and existence, passed laws in their respective states to bar outsiders from buying agriculture land thus becoming permanent residents of their states," they wrote.