The voters are being given three options—Channi, Sidhu or no CM face 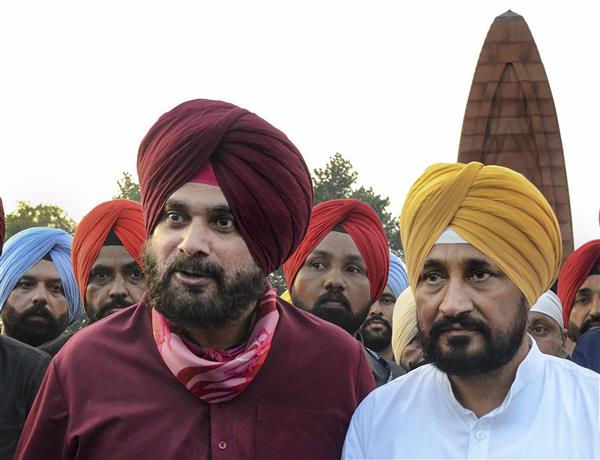 Moving into the next phase of its digital campaign under its ‘Punjab Di Chadhdi Kala, Congress Mange Sarbat Da Bhalla’, the Punjab unit of Indian National Congress (INC) on Wednesday launched its theme song.

Earlier, a teaser of the audio-video theme song, focusing on the party’s star campaigners and contenders of the CM face, Navjot Singh Sidhu and Charanjit Channi, was shared on Wednesday morning on the INC’s Punjab Twitter handle. The teaser shows pictures of both Sidhu and Channi.

Party insiders handling the digital and backed strategy say the teaser and release of the theme song would arouse interest of the voters in the party's campaign and associate themselves with party candidates in the respective assembly segment.

Incidentally, the teaser projected both Sidhu and Channi as the party’s face seeking opinion of voters through a pre-recorded message on the Interactive Voice Response System (IVRS) being sent out to mobile numbers of voters across the state. Party leaders aim to send the IVRS message to nearly 1.5 crore voters having mobile connections.

The voters are being given three options — Channi, Sidhu or no CM face.

Feedback is also being sought through candidates, AICC coordinators and survey teams spread across all 117 Assembly segments.

Through the message, the voters are being given three options — Charanjit Singh Channi, Navjot Singh Sidhu or no CM face — to choose from.

Gokul Butail, joint secretary, All India Congress Committee, and incharge of election control room for Punjab, said feedback was being sought through the IVRS system.

The party is reaching out to nearly four lakh party workers, including coordinators and district incharges at the block level. The party is expected to announce the CM face between February 7 and 10. Rahul Gandhi is expected to visit the Malwa region in the first week of February. “The party will build the momentum before announcing the CM face,” said a senior leader.