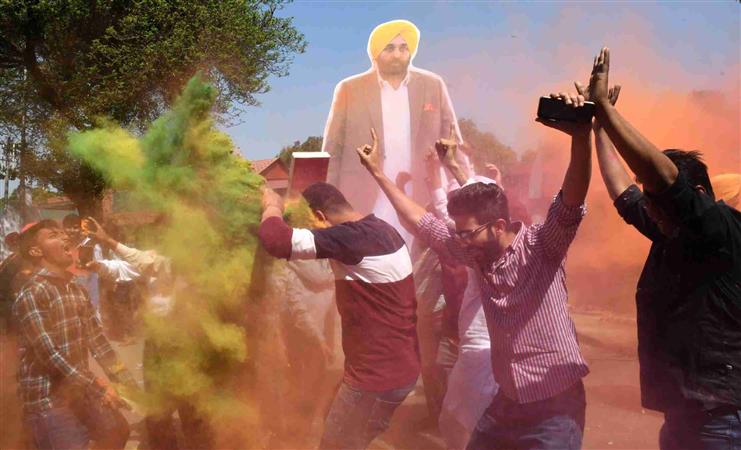 The Aam Aadmi Party stormed into power in Punjab, winning 92 seats, according to the Election Commission’s website.

In the 117-member Assembly, a party needs to get 59 seats to form the government.

Meanwhile, in a tweet Prime Minister Narendra Modi said, "I would like to congratulate AAP for their victory in the Punjab elections. I assure all possible support from the Centre for Punjab’s welfare."

While the SAD won three seats, it’s ally BSP won one, and the BJP won two seats and one seat went to an Independent candidate.

AAP supremo Arvind Kejriwal hailed the party’s performance in Punjab as a “revolution”.

Apart from Chief Minister Charanjit Singh Channi, who lost from his Chamkaur Sahib as well as Bhadaur, former CMs Parkash Singh Badal, Amarinder Singh and Rajinder Kaur Bhattal were also among the heavyweights who were defeated.

In the 2017 Punjab assembly polls, the Congress had ended the SAD-BJP’s 10-year rule by bagging 77 seats.  AAP had managed to get 20 seats while the SAD-BJP had won 18. Two seats went to the Lok Insaaf Party.

“Many congratulations to the people of Punjab for this revolution,” Delhi CM Arvind Kejriwal said in a tweet in Hindi.

He also posted a picture of himself standing with AAP’s chief ministerial face Bhagwant Mann.

The oath-taking ceremony of the new Punjab cabinet will be held at Khatkar Kalan, the ancestral village of legendary freedom fighter Bhagat Singh in Nawanshahr district.

Mann said no government office will display photograph of the chief minister.

Instead, photos of Bhagat Singh and B R Ambedkar will be put on walls in government offices.

“The oath-taking ceremony will not be held at the Raj Bhawan, but at Khatkar Kalan. The date will be announced later,” Mann said addressing party workers and supporters at Dhuri.

Appealing to people to work unitedly, Mann said those who did not vote for APP need not worry as the government will work for all sections of society.

On the other hand, the rival parties accepted the people’s verdict and congratulated AAP.

“I humbly accept the verdict of the people of Punjab and Congratulate @AamAadmiParty and their elected CM @BhagwantMann Ji for the victory. I hope they will deliver on the expectations of people,” said Channi.

Former CM and Punjab Lok Congress president Amarinder Singh said he accepted the verdict with all humility as democracy triumphed.

Amarinder Singh had floated his own party after quitting the Congress last year, owing to his unceremonious exit as the CM. He lost from his home turf Patiala Urban by a margin of 19,873 votes to AAP candidate Ajit Pal Singh Kohli.

Shiromani Akali Dal president Sukhbir Singh Badal said that his party whole-heartedly and with total humility accepts the mandate given by the people of the state.

“We whole-heartedly & with total humility accept the mandate given by Punjabis. I am grateful to lakhs of Punjabis who placed their trust in us & to SAD-BSP workers for their selfless toil. We will continue to serve them with humility in the role they have assigned to us,” Sukhbir Badal tweeted.

AAP senior leader Raghav Chadha said the party will emerge as the national and natural replacement of the Congress in the coming days.

Chadha said people of Punjab have chosen Bhagwant Mann and the Kejriwal model of governance.

There was jubilation in the AAP camp right from the morning as early trends clearly put AAP away ahead of rivals.

Lakhwinder, an AAP supporter in Kharar, said, “Those parties which until yesterday were questioning the exit poll surveys, which showed clear majority to AAP, will have no face to show now.”

The results also showed that the Sanyukt Samaj Morcha, a political outfit floated by various farmer bodies, failed to make any mark.

In the 2022 elections, AAP sought to project itself as an agent of change and designed its poll campaign likewise and accused its rivals of “looting” the state.  It also announced its chief ministerial face ahead of polls to give clarity to voters.

The Shiromani Akali Dal (SAD) and the Congress have alternatively been forming governments after the reorganisation of Punjab in 1966.

The Congress fought the elections with Charanjit Singh Channi as its CM face, hoping for the consolidation of the Scheduled Caste votes.

The stakes were also high for the SAD, which contested the polls in alliance with the BSP after breaking electoral ties with the BJP over farm laws.

The BJP, which used to be a junior partner during its alliance with the SAD, fought this election as a major partner after allying with the Punjab Lok Congress and Sukhdev Singh Dhindsa-led SAD (Sanyukt). (With PTI inputs)

I would like to congratulate AAP for their victory in the Punjab elections. I assure all possible support from the Centre for Punjab’s welfare. @AamAadmiParty

A man who once ran a mobile repair shop and an eye surgeon proved to be the nemesis for Punjab CM Charanjit Singh Channi, who was defeated by them in the Punjab Assembly polls. Read story

@Akali_Dal_ president @officeofssbadal has called a meeting of the party’’s Core Committee & all candidates of the party at party HQs Chandigarh at 2.00 PM on Monday March 14. Meeting will discuss and analyse poll results according to @Harcharan_Bains Senior Vice President SAD

As results of the assembly polls showed BJP’s clear mandate in Uttar Pradesh, pollsters emerged winners with on-target prediction of not only the saffron party’s victory, but also an emphatic win for AAP in Punjab. Read story

Charanjit Singh Channi said he humbly accepts the verdict by the people of Punjab and congratulated the AAP on the victory.

I humbly accept the verdict of the people of Punjab and Congratulate @AamAadmiParty and their elected CM @BhagwantMann Ji for the victory. I hope they will deliver on the expections of people.

As Aam Aadmi Party heads for a landslide victory, with almost all political stalwarts across the political spectrum trailing behind hitherto relatively lesser known AAP candidates, the big win in Punjab has catapulted the party to national prominence. Read full report

In a major upset in Punjab elections, most of the stalwarts had to bite the dust. Those who lost the polls are SAD patron Parkash Singh Badal, Capt Amarinder Singh, Sukhbir Badal and Chief Minister Charanjit Singh Channi. Read full report

MOGA: Bollywood actor Sonu Sood's sister Malvika Sood of the Congress party is trailing by 17630 votes in the 9th round in Moga assembly constituency. The AAP candidate Dr Amandeep Kaur Arora has secured 37285 votes followed by Malvika Sood 19655 votes. The SAD candidate Barjinder Singh alias Makhan Brar has got 17084 votes. The sitting MLA Dr Harjot Kamal of the BJP is far behind getting just 4411 votes.

AAP leading in Dera Bassi after Round 10

12:30 10 Mar
Party wise vote share after the last round of counting in Punjab

Ludhiana: After 13th round, AAP Deputy Leader of Opposition Sarvjit Kaur Manuke set to win from Jagraon as she leads by over 35000 votes.

AAP leading in Kharar after Round 15

Punjab Chief Minister Charanjit Singh Channi is leading from Chamkaur Sahib seat in early trends of counting that began at 8 am on Thursday. However, he is trailing from another seat, Bhadaur.

Ludhiana: AAP heading for clean sweep by leading in 11 of total 14 Assembly constituencies in the state's biggest and largest district Ludhiana. Ruling Congress, SAD and BJP leading at one seat each. Both sitting MLAs Bains brothers of LIP trailing.

Pargat trails even after round 4 from Jalandhar Cantt

AAP's chief ministerial face Bhagwant Mann is leading from Punjab's Dhuri seat by a margin of 4,387 votes on Thursday, according to early poll trends.

Mann is leading over his nearest rival and Congress candidate Dalvir Singh Goldy.

Sangrur: Leader of Opposition Harpal Cheema leading from Dirba with 5722 votes, out of 10136 in first round.

In early trends, Shiromani Akali Dal leads in Mukerian Assembly constituency in Punjab, as per the Election Commission

Ludhiana: Counting of votes for all 14 Assembly constituencies in the district gets underway at 14 counting centres. Fate of two Cabinet Ministers, two former Akali Ministers, AAP's Deputy Leader of Opposition, four former bureaucrats, 12 women among 175 candidates to be decided.

Counting starts in Government Mohindra College Patiala where EVMs for Patiala urban seat are kept. Capt Amarinder is contesting from this seat. 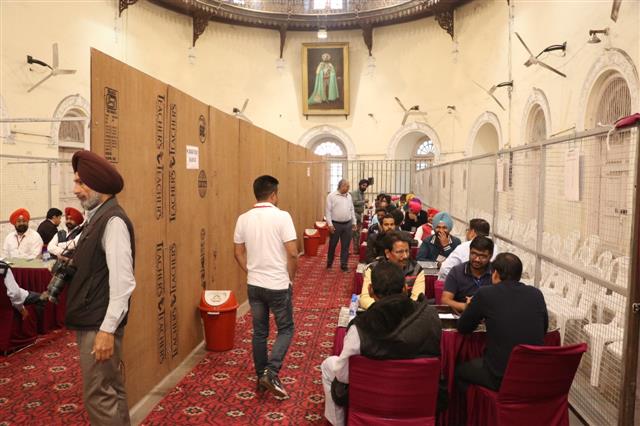 The poll outcome will decide the fate of several political bigwigs in Punjab, including that of SAD patriarch and five-time Chief Minister Parkash Singh Badal (Lambi). He is fighting against Gurmeet Singh Khudian (AAP), who quit the Congress for being “ignored.”